In tough times, loneliness and love

Jamie Ford, the son of a Chinese-American father, mines his heritage and the history of his hometown of Seattle well in his second novel. I have not read his debut novel, Hotel on the Corner of Bitter and Sweet, a love story about a Chinese American boy and a Japanese girl during the World War II internment of Japanese in the United States. That first novel was a bestseller, but critics gave it mixed reviews. I suspect this second novel may have a similar reception among readers and reviewers. 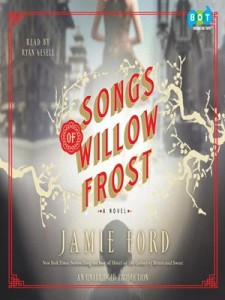 William Eng is a 12-year-old Chinese American boy who has spent five years in a no-nonsense Catholic orphanage in Seattle during the grim years of the Great Depression. His memories of his mother, Liu Song, are warm but growing fainter.

When all the orphanage boys are taken to a movie theater to celebrate their collective (for convenience sake) birthdays, he sees a Chinese-American actress, Willow Frost, on the screen and becomes convinced that she is his long-lost mother. Learning that Willow Frost is going to be making personal appearances in Seattle, he runs away from the orphanage with his best friend, a blind girl named Charlotte.

As William tries to find his mother, and then tries to understand why she abandoned him, the novel moves back and forth between his story and hers, from 1934 to the 1920s.

In many ways, the story is compelling, particularly as it brings to life history about which most readers probably know very little. Ford obviously does his research, and he does a good job of weaving what he has found into his story. Thus readers learn about Chinese-American culture in Seattle in the 1920s and ’30s, its ties to China, and the terribly difficult position of women who found themselves alone. We learn how times during the Depression were so dire that many parents of all races and ethnicities were forced to turn their children over to orphanages. We see the discrimination against Chinese Americans, who often were denied even access to hospitals. And we learn fascinating details about the development of the motion-picture industry. The story is dotted with characters based on real people, and even some real people themselves: The black actor and comedian known as Stepin Fetchit is in the book as a friend and colleague of Willow Frost’s.

The stories of William Eng and Willow Frost are compelling as well, but somewhat frustrating. Ford writes well, but at times he borders on overwriting, heavy-handed symbolism, and melodrama. Some of the characters – the evil stepfather, the stern nun, Charlotte’s crass father, the social worker – are more stereotype than alive.

Listening to the audio version was, in a way, instructive, and eventually rewarding. At first, I found Ryan Gesell’s reading curiously and disturbingly dreamy and detached, when narrating the stories of both the son and the mother. Then I decided that the fault, if any, was not his, but in the writing – that the voices in the two lines of the story are too similar, and that both depict William and Willow largely as victims.

Had I been reading the print version, I might have decided the story was too depressing and given up. But I came to care about both main characters, and Gesell’s reading eventually drew me in, propelling me along. In the end, the book was more heartening than I had feared, and I was glad that I stayed with William and Willow as they tried to find each other and themselves.