Is it a ghost? Not exactly…

What a happy day it is when a favorite author resurrects a series hero who was believed to be dead! Bob Moyer takes a look at the resurrected Easy Rawlins. 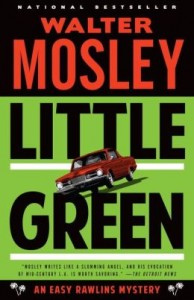 Easy Rawlins back from the dead? No, that’s not quite right. How about Easy Rawlins survives his creator’s effort to knock him off. About six years ago, Walter Mosley moved to a new publisher, along with his new Manhattan private eye. Before he left the West Coast, he sent Easy hurtling over a cliff in what seemed to be a flaming finale. Apparently, however, you can’t keep a good man, or a good series, down.

In this welcome return, Easy’s alter ego, the killer Mouse, brings his friend up the cliff and delivers him to his “family” of  adopted children. The backwoods alchemist Mama Jo gives him a case of her Gator’s Blood to get his juju going, and Mouse gives him a case to get back in the swing of things. A  young man nicknamed Little Green has disappeared, his mama is in despair, and Mouse plays dumb about why he wants Easy to take the case. Easy sets off into the late sixties L.A. he knows so well to find the boy.

It’s not the same place, however. The hippies have arrived, “…runaways, throwaways, and some no-way-at-all youngsters traveling in the company of older hipsters … like a primal purgatory where transient human spirits stopped to party until the final decision was laid upon their brows.”

And Easy isn’t the same man: “I had died and there was nothing that anyone could do to match the experience of my semi resurrection.” Looking at life in this new light, Easy shows us how Chandler’s mean streets have turned into high streets. Apparently the boy dropped some acid in defiance of his mama, and got mixed up with some bad guys and big money.

As Easy gets stronger and closer to the solution, he stuns us with the plight of the black man in a white world, peace and love notwithstanding. He pauses in the midst of a confrontation to share this insight, worthy of Richard Wright: “But our true inheritance was the fear of being noticed, and worry about everything from rain collapsing the walls around us to a casual glance that might lead to lynching. We – almost every black man, woman and child in America – inherited anxieties like others received red hair or blue eyes.”

As always, Easy dispenses some appropriate justice that doesn’t have anything to do with the police or the courts. He may not be the young man “running into the yard behind Ruby, looking for that sweet oblivion that all young men thought could save them from the greater darkness that dogged their heels,” and he may be wearing “…Death on my shoulders like a superhero’s cape,” but he’s still the best darn black private eye in L.A. Heck, he’s the only black private eye in L.A., and it’s good to have him back.

This entry was posted in Mysteries and tagged Easy Rawlins, Walter Mosley. Bookmark the permalink.