Under the ‘stinky’ ginkgo tree

I’m always glad when Tom Dillon reviews a book for the blog. Not only is he a clear thinker and fine writer; he also reads the most interesting books, ones that might otherwise not come to our attention.

I was reading this book in a coffee shop the other day when a woman interrupted me to ask, “You’re reading an entire book about ginkgo trees?” The question aptly illustrated the common American misconception about that “stinky” tree.

All most Americans know about ginkgo (also spelled “gingko” in some places) is that its fruit can produce an awful smell, as least until the pulp is shed to reveal the nut, and I’m sure that was what was on her mind.

But there are a lot of other subjects that the ginkgo could bring up. A few of them are dinosaurs, the opera “Madame Butterfly,” tree sex (there are male and female ginkgos, and only the females produce the stinky fruit), North Dakota fossils, the Ice Ages, the atom bomb, natural remedies and Jonathan Swift’s Gulliver, of Gulliver’s Travels. And that’s only a start.

For the ginkgo may be the oldest tree in the world, a living link to the age of the dinosaurs and the world before man. Ginkgos are common symbols of long life – indeed, some of them have lived for thousands of years – around religious sites in China, the tree’s original home.

They haven’t been around that long in other parts of the world, but there are ginkgos hundreds of years old in places like the Royal Botanical Garden at Kew in Britain and the botanical garden that John Bartram created in Philadelphia in the 1700s. Both gardens still exist, for the record. The big ginkgo at Kew is called “the old lion;” it also dates from the 1700s.

Peter Crane is dean and professor of the School of Forestry and Environmental Studies at Yale University and former director of the Royal Botanic Gardens at Kew, where the idea for this wonderful book originated.

Work began on the book at Kew, continued while he taught at the University of Chicago and was finally completed at Yale, Crane tells us, thanking all three schools for putting up with his “indulgence.” Much of the writing took place from 2009 to 2011, when he was a visiting professor surrounded by ginkgo trees at the National Research Foundation of Korea.

You’ll profit from an interest in botany if you pick up this book; knowing about people like Carl Linnaeus and things like seed propagation are a good head start. But it’s clearly not a normal piece of scientific research and had little to do with his professional duties, Crane says. He’s just interested in a fascinating tree.

The story of gingko began far back in prehistory, when its seeds may have been dispersed as they were eaten by dinosaurs and perhaps some early mammals. The tree also began to die back in prehistory, perhaps as its seed dispersers died out. By the dawn of history, it was almost gone.

But then came man, discovering that ginkgo has one of the longest botanical pedigrees on the planet and may in fact have some medicinal properties. Here the story of ginkgo biloba as a stimulant to memory arises, along with the Oriental fondness for the nuts.

The result is that today, while it’s rarely found in the wild outside China, ginkgo is common on city streets from Beijing to Tokyo to London to New York. The tree is renowned for its golden fall foliage, is resistant to air pollution despite being unchanged biologically for millions of years, and is seen as one of today’s “living fossils,” a tree that time forgot.

It’s beyond the scope of this review to plow through the botanical characteristics that make ginkgo unique, but it’s easy to tell some of the stories that Peter Crane has come up with. To me, the most enduring is that of Philipp Franz von Siebold, who may have been the model for Lieutenant Pinkerton in Giacomo Puccini’s “Madame Butterfly.”

Siebold lived in Nagasaki during the 1820s, when Japan was still almost entirely closed to the western world. But he was a doctor and had an unusual freedom to leave the island where foreigners were required to live.

He met, fell in love with and married a Japanese woman, Kusumoto Taki (also given the name Sonogi), and they had a daughter, Oine, just as did Pinkerton and Butterfly. But Siebold was no Pinkerton. He might have spent the rest of his life in Japan, but for an unfortunate incident in Nagasaki harbor in 1826 that left him branded as a spy. He was banished for life.

You’ll have to read the book to find out exactly what happened, but I will tell you that Siebold and Sonogi both survived, unlike Butterfly. Siebold later married and had five children, and Sonogi married twice. By the time of an emotional reunion decades later, Oine was on her way to becoming Japan’s first female doctor.

The connection to ginkgo is that Siebold wrote the book Flora Japonica, part of an early trilogy on nature in Japan, and the book and other work can be said to have stimulated interest in the ginkgo in the West.

There are many more stories, one of them about the ginkgo trees that survived Hiroshima, but perhaps the best way to close this review is with Johann Wolfgang von Goethe’s poem “Ginkgo biloba,” which early caught Crane’s eye. It reads, translated from the German:

This tree’s leaf which from the Orient

Is entrusted to my garden

Lets us savor a secret meaning

As to how it edifies the learned man.

Is it one living being

That divides itself into itself?

Are there two who have chosen each other,

So that they are known as one?

To reply to such a question

I found, I think, the condign sense.

Do you not feel that in my poems

I am single and twofold? 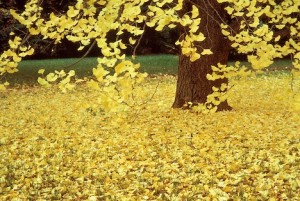