Into the viper’s nest

Rarely is a history lesson as entertaining as in the Maggie Hope World War II novels. Here’s a review of the latest one, No.  3 in the series. 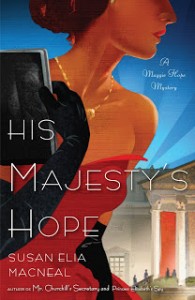 And that’s saying a lot, because the opener to this series, Mr. Churchill’s Secretary, was a well-done, highly entertaining historical novel, and the second entry, Princess Elizabeth’s Spy, skillfully built on that success.

Maggie is a spunky, bright young woman who gets caught up in World War II when she visits England, the country of her birth, to sell her late grandmother’s house. Though her adopted country, the United States, is not yet in the war, Maggie decides to stay in London and do what she can to help. At first, this means that a gifted mathematician with a degree from Wellesley is relegated to typing chores, simply because she is female. But at least she’s typing for Winston Churchill. Before long, she works her way into challenges more suited to her skills.

In the second book, Maggie feels a bit let down when, despite her training as a spy she’s sent to Windsor Castle to tutor Princess Elizabeth in maths. But, as it turns out, Maggie is in the right place at the right time, and with the right training and instincts, to save the princess and thwart a Nazi plot.

Now Maggie gets her chance to prove herself as a full-fledged secret agent when she is sent on a mission to Berlin.

As the books have progressed, Maggie and the readers have learned more about her background. She was raised by her aunt, a Wellesley professor, who led her to believe that she had been orphaned when her parents were killed in a car crash. But bit by bit, she learns that her past is much more complicated than that. And that past has profound implications for the present and her work in the war.

MacNeal draws on her extensive research to ably weave real historical figures and events into Maggie’s adventures. The plot has twists and turns enough to please any fan of mystery/suspense. And MacNeal also manages to tell entertaining stories not only about Maggie’s work, but also about her personal life, including her romances and her efforts to come to grips with her heritage. Maggie is a real young woman, with doubts, vulnerabilities and emotions, doing her best to make a difference at a time when England, America and liberty were in grave peril.