My husband says he can’t drive while listening to an audio book – it’s too distracting. But I can (and usually do), except when traffic gets bad or directions confusing.

On a recent trip, I took the wheel so that we could listen to a book I thought we’d both enjoy. I was right. He’s a former science teacher and I’m liberal arts, English major type, but we both found this nonfiction tale fascinating.

Unfortunately, we didn’t quite finish the book before we finished the trip. I’ve since listened to the rest during everyday driving, and he’s planning to find where to resume the story in the print version of the book. 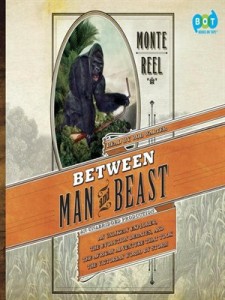 You’ve heard of Charles Darwin, Thomas Huxley and the debates that raged over evolution in Britain in the mid-19th century. You’ve heard of the exploits of such famous African explorers as Speke, Stanley and Burton. You’ve heard, of course, of Abraham Lincoln, the American Civil War and the accompanying controversies over slavery and race.

If you’re like most of us, however, you may not have heard of Paul Du Chaillu, who had a key role in the scientific, religious and social debates of the latter half of the 19th century on both sides of the Atlantic.

Monte Reel, a former correspondent for The Washington Post, has drawn on extensive research to tell Du Chaillu’s story, one that’s well worth the reading.

Du Chaillu was not a trained scientist or an experienced explorer. As his story begins, he’s a young man of small stature, uncertain origins, modest means and a great desire to make a name for himself as an adventurer. He became the first person other than primitive African tribesmen to see what until then had been only a mythical monster – the gorilla. The evidence he brought out of his harrowing adventures in the African interior, and the tales he told, caught the imagination of people in England and the United States.

For a while, Du Chaillu seemed to have achieved the fame and status he so craved. He was the hottest celebrity around.

But the gorillas he described became caught up in the swirling, increasingly heated debates over evolution, racial differences and religion. Fame could be cruel in the Victorian era just as it can today. Du Chaillu soon became more a target than a hero.

Eventually he returned to Africa for another, better planned, expedition, hoping to prove that his original stories were true, to restore his credibility and defend his honor. Despite the better planning and preparation, Du Chaillu encountered great dangers and hardships.

Du Chaillu’s expeditions would in themselves provide plenty of material for a fascinating book, and Reel describes encounters with cannibals, tribal kings, disease and dangerous beasts in rich detail. Paul Du Chaillu is, though far from perfect, engaging, and it’s easy for the reader to root for him as he pursues his goals with such determination.  By book’s end, we appreciate the contributions of this unlikely adventurer and surprisingly good naturalist.

Reel also does much more, putting Du Chaillu’s personal ambitions and struggles into a much broader context. We learn a lot about the cutthroat nature of 19th-century scientific competition, about the strong strain of racism in Victorian England and about the crass nature of the propaganda circulating as the United States moved toward war. Reel matter-of-factly recounts how being a naturalist in those days meant being a hunter, as specimens usually were killed, skinned and stuffed for shipment to museums and elsewhere, to be uses in scientific studies or merely for entertainment. We also learn about the interactions of Europeans and natives as Africa was opened and exploited.

The audio version of the book, ably read by Bob Walter, is engrossing, with its blend of adventure tale and thought-provoking history. For those who want more information, the printed book has extensive notes, a bibliography and an index.

2 Responses to Gorillas, evolution and adventure