I’ve read all Charles Todd’s books since that mother-son team’s first novel appeared in 1996.  Now, we have the 15th in that first series (there’s now a Bess Crawford series as well). As with any series, some Inspector Ian Rutledge mysteries are better than others. But even those that might not be as completely satisfying suffer mainly in the comparison to other novels in the series. Judged against other police mysteries with historical settings, Todd’s books always measure up well. 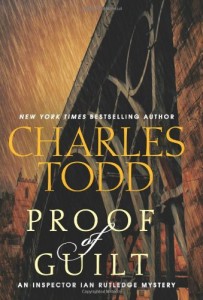 It’s the summer of 1920, and an unidentified dead man found in a London street presents a difficult puzzle for Inspector Ian Rutledge.  Not only does he not know who the man is. He also doesn’t know where, why and how he was killed.

Tracking down what few clues he has, Rutledge learns that Lewis French, the British head of a firm that produces fine wine on the island of Madeira is missing.  The missing man, however, does not appear to be the man who has been found dead, although there may be a connection.

As Rutledge looks further into the case, he learns a good deal about Lewis French and about the family business, with operations in Madeira and in England. There are a number of people who might have a motive to want French dead, and who might know something about the dead man. He has a partner in Madeira, who is supposed to be on his way to England. He has a jilted former girlfriend, and a current fiancé. Then there’s his sister, who has long resented being marginalized in the family business and treated as little more than a housekeeper.

Rutledge learns, too, about a violent episode in the family’s past. The more he looks into the case, the more he thinks that episode might have some bearing on what’s happening in the present.

Unfortunately, he also has to deal with the new acting chief superintendent, who has other ideas about the case. The boss thinks Rutledge is stubbornly wasting time.

Longtime readers of the series will know that, although his mental and emotional state is improving, Rutledge still suffers from a form of Post Traumatic Stress Disorder – known in those days as shell shock – from his experiences as an officer in World War I. Specifically, the voice of Hamish, a young Scotsman Rutledge had to kill when he disobeyed orders in the heat of battle, speaks in his head. Hamish is not as much a factor as he was in the early books in the series, but he’s still there from time to time, often offering a timely warning. When I started reading the Ian Rutledge books, I found Hamish distracting, but I have learned to accept him as a part of Rutledge.

More troubling is the multitude of characters in this book, some of whom don’t become sufficiently alive for the reader to immediately recognize them when they re-enter the story. This is an intricate mystery, with a good plot, but the reader is in danger of getting overwhelmed. I am not the first reviewer to suggest that Charles Todd might help by using the tried and true device of a cast of characters listed at the book’s beginning. Then the reader who gets momentarily bewildered can refresh her memory and return to trying to solve the mystery.

All in all, though, this book is well worth the reading. As always, Todd gives us rich details of life in England after the Great War, when so much had changed and people were struggling to re-establish some semblance of life as they had known it. And the honorable Rutledge, broody and troubled as he is, carries on with a strong sense of what is right and what is just.