Fortunately for her legions of fans, Anne Perry continues to produce fine novels in her two series set in Victorian England, the William Monk novels and those featuring Thomas and Charlotte Pitt. 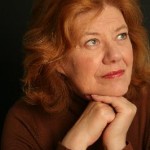 These books offer so much: They are excellent historical novels. Perry does her research well, presenting us with an unsentimental picture of life in the upper levels of British society, and outdoing Dickens in depicting the often-terrible existence of the poor souls in the rough alleys and byways. Historical figures wander through her pages, and actual events help shape her characters’ lives. Political intrigue and secrets are at work in a way that reminds us of our more modern world. Her carefully chosen details vividly portray the sights, smells and sounds of London.

Perry’s books are also intricately plotted, gripping mysteries, with real peril facing her characters as they try to find answers.

And they are thoughtful studies in morality, justice and the sometimes ambiguous choices that good people face in the midst of evil.

Here’s a look at the two new offerings out this year.

As the commander of the River Police, William Monk encounters many of society’s ills and horrors as the Thames flows through London’s heart. But still, he’s shocked on the December morning when he discovers the grossly mutilated body of a woman dumped on Limehouse Pier. What could have prompted such a display of rage or hatred?

His investigation produces a suspect with surprising ease. The dead woman is Zenia Gadney, by all accounts a quiet, gentle person in her 40s. Most women in the area are prostitutes, but Zenia was known to live circumspectly, with only one male visitor, a man who came once a month and apparently gave her enough money to live on.

The suspect is that man’s wife, Dinah Lambourn.

Simple? Hardly. Dr. Joel Lambourn, the man, had died an apparent suicide two months earlier. He had been working on a report for the government in support of legislation in Parliament to regulate the widespread sale of over-the-counter medicines containing opium, medicines that were blamed for a number of deaths, especially of children.

Monk has no choice but to arrest Dinah Lambourn, but he also feels that he has no choice but to comply with her request that he ask his old friend Oliver Rathbone to represent her in court. Soon, Monk and his wife, Hester, a former army nurse who now treats prostitutes, are helping Rathbone try to get to the truth. Increasingly, it looks as though the deaths of Lambourn and Zenia Gadney are somehow related.

Rathbone has struggles of his own as he tries to deal with the breakdown of his marriage after he was forced into a difficult decision in another particularly unsavory case that involved Monk’s police efforts (Acceptable Loss, 2011).

As the three friends delve more deeply into the events surrounding the deaths of Lambourn and Zenia Gadney, they find themselves running afoul of high government interests.  They learn more and more about the shame of Britain’s participation in the Opium Wars in China, and the growing problems of opium use at home – and about the fortunes and reputations at stake.

The investigation becomes more urgent as the trial proceeds, and Dinah Lambourn appears to be in danger of being hung soon after the Christmas holidays. Monk finds himself facing a moral dilemma akin to the one that still haunts his friend Rathbone.

In Anne Perry’s London, as in life, there are few easy answers. 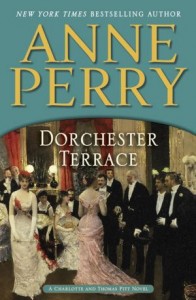 Since Thomas Pitt became the head of Britain’s Special Branch, he has had much to prove to himself and to those who question his ability to deal with delicate but crucial matters of state security. He’s also had to socialize in the upper levels of society in a way that often makes him uncomfortable. Fortunately, he has his loving wife, Charlotte, to help him on all counts. Charlotte might have been viewed as marrying beneath her station when she chose a policeman, but she has the contacts and the savvy to be a great asset to him as he pursues his new responsibilities. And she’s long relished any opportunities to help him solve his cases.

While Pitt is still feeling his way in his high-level new job, he begins to hear whispers about a plot to blow up a rail line in England – while an Austrian duke is traveling to visit his relatives among the British royals.  It’s well known that political problems are festering on the Continent, threatening to erupt into war. An attack on an Austrian royal on English soil could be disastrous. But what if it’s all a rumor? How far can and should Pitt go to ward off what might never happen? And is what he’s hearing really a red herring designed to distract Special Branch from some even more sinister plot?

Lady Vespasia Cumming-Gould, Charlotte’s aunt, has another problem on her mind. An old friend, an Italian woman who had a colorful youth as a revolutionary, has asked her for help. The woman, slipping into dementia, is afraid that she might divulge secrets from long ago that still would have the power to cause harm. Vespasia is skeptical at first, but she becomes increasingly worried about the interest in Serafina on the part of a young Croatian woman married to man with considerable power in London.

The suspense mounts as Pitt tries to determine what is really going on and what actions, if any, need to be taken.  In the end, he is forced into a wrenching decision – with little time to agonize over the choice.

The story is gripping, the characters as complex and interesting as ever. The insights into England and the Continent as the 19th century came to an end are fascinating.  Readers will perceive the seeds of the coming Great War that would change so much for so many.