Have we come to this?

Every summer, Paul O’Connor sets out driving across the country, writing vignettes along the way. This year, he took a supply of audio books with him. Many he has liked, some not so much. I must say after reading this review that I think Paul enjoys panning a book more than he enjoys praising one. Maybe he’d just had a hard day on the road when he sat down to write this piece. 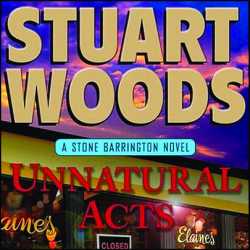 A man will take desperate measures while on the road, traveling across endless miles of Middle America – eat at Pizza Hut, drink Corona beer, stay at a Motel 6. I hope to never again be so desperate for entertainment, however, that I listen to another “Stone Barrington Novel” from author Stuart Woods.

I understand that many people don’t care about good writing, thoughtful character development or original story concepts. They just want a paperback, or in this case an audio book, that will keep them busy during long hours in the car or on an airplane.

But, Lord help us, we haven’t come to this, have we? A totally plastic set of characters, and a plot implausible from the start, improbable through the end and about as contrived in its circumstances as contrived can get. And then there really isn’t a main plot, anyway.

Stone Barrington is a former New York City detective who was in that job for a dozen years despite having previously earned a law degree from NYU Law. So, one day he took the bar exam, got his license but maintained ties to his old police buddies with whom he hangs. Now he works for a major firm, having the privilege of working out of his home and, of course, randomly meeting beautiful women who fall into bed with him, and he has no problem doing so because he appears to be fully recovered from the murder of his wife about a year ago. And, did I mention that he’s rich.

And then there’s a hotshot 30-something lawyer, Herb Fisher, whom Woods portrays, alternatively, as a cold-hearted killer, a wise and mature go-getter, a little naive and sometimes vulnerable, a brilliant businessman … OMG.

The rest of the characters are no more believable as representations of people who actually exist. The chief detective, for example, has every feature of the stereotyped big-city cop we could see on TV most nights in the 1970s. This one is so tough that after he witnesses a murderer’s suicide in the afternoon he is able to have a perfectly fine dinner at a high-powered club that night, hardly giving a second thought to the blood and brains that were splattered throughout the room in which the suicide took place. And, here’s another thing: The New York City cops in this book/audio all can afford to eat at Elaine’s, Sardis, the Algonquin Hotel, etc., as if they were rich, too.

But I listened to the end. Which is probably more a commentary on the scenery one encounters while driving through South Carolina, George and Alabama than it was on anything else. At least Tony Roberts does a nice job of reading the book, even if half of the characters sound like the detective.