Another place, another time

Steve Wishnevsky takes a look at a first novel that intrigues him as much for the history it offers as for the story it tells. 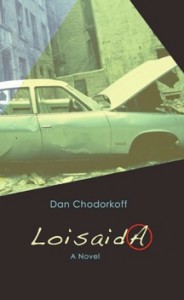 This is an interesting first novel, a bit stiff perhaps, but a valuable look at an erased piece of New York City history, and a recounting of the forces that erased that history.

Dan Chodorkoff is a co-founder of something called the Institute of Social Ecology, a cultural anthropologist and a longtime political activist. All of these professional traits flavor this book, more of a history perhaps than a rockem-sockem counter-cultural novel. A worthwhile read, however.

“Loisaida” is a Spanish pronunciation of “Lower East Side.” And there are several books with this title, fiction and fact. In this volume, Catherine, a young Jewish girl from the suburbs, has dropped out of her comfortable life and moved into a “squat,” an abandoned building on the Lower East Side, probably in the 1980s. She has a boyfriend, Mike, who plays in a band, and a couple of jobs, as a waitron and as a writer for an underground paper. Her boss at the paper, the Avalanche, is a doctrinaire activist for some cause defined only by himself. He calls himself an Anarchist, comes from a wealthy family and is a bit of a prick. The primary thrust of the novel concerns the attempt of a Hispanic developer to build apartments on a recycled bit of wasteland where the local Puerto Rican community activist has improvised a neighborhood people’s park.

The flow of the novel is predictable, even preordained. The developer tries to buy off the activist, the anarchist starts a riot discrediting the squatters, Cathy leads a revolt to take over the Avalanche, and the developer harasses her, and has her and her friends evicted from their squat. Things get bad; then they get worse.

What makes this book rise above the usual is Cathy’s relationship with her dying great-grandmother, who was a real anarchist and socialist at the turn of the century. She had escaped a pogrom in Czarist Russia, was involved with the Triangle Shirtwaist Fire, and tells a century’s worth of tales about the Jewish Left. Good stuff. Good history.

Of course, it ends badly, the poor never win, and the punk anarchists never had any of the discipline that the World War I Reds had. I find the language nowhere nearly obscene enough; I spent a few weeks in that place at that time, crashing down on Avenue D in 1989 or so. But it’s a worthwhile read. You should check it out.