Back on the mean streets 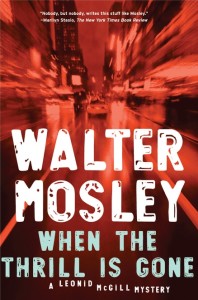 Leonid McGill makes only his third appearance in Walter Mosley’s new series, but we’ve seen his kind before — the hard-boiled kind.  Short, stocky and deadly, McGill works the New York streets, the same “mean” streets patrolled by Raymond Chandler’s Philip Marlowe and Dashiell Hammett’s Sam Spade.  The words McGill uses to describe himself could have come from their lips: “Patience is one of my best qualities …. But patience is not my only virtue.  I can also take a punch, or a hint, go for years without love or relief, and I can face Death in the eye and hardly flinch.  Not only can I stand up under pain, but I can ignore the pain others feel.  I always pay my debts but rarely act out of a desire for personal revenge.”  Drinking hard, doing in bad guys and falling for dames, McGill is a tough guy directly descended from Marlowe and Spade.

And he’s one of the best.  He’s not just hard-boiled, he’s hard-core.  As someone somewhere said, nobody writes this stuff like Mosley.  At the beginning of the book, McGill finds his wife having an affair with his son’s best friend, his son running a scam on the subway system, his mentor dying of cancer — and no client. When two clients appear, he doesn’t want them: He doesn’t believe the woman who says her husband is trying to kill her, and he doesn’t want to work for the crime boss anymore.

In true hard-boiled tradition, however, he can’t turn down the money in the first case, and the favor in the second. More complex than they seem, of course, the two cases send him across (and under) the urban landscape looking for some resolution, of the cases and his life.

Abandoned by a black Marxist father, orphaned by a heart-broken mother, and brought up in the streets, McGill now tries to save the world without losing his soul. Once upon a time, he was a “predator, who “…stalked people’s souls, took from them their most precious possessions, their secrets.” As he threads his rehabilitated way through Mosley’s plotline, he provides a unique perspective on reaches of society the reader rarely encounters, from the ridiculously rich husband who builds a bungalow on top of a skyscraper, to the beat-down prostitute he offers to save from her pimp. While McGill searches for the woman his client says she is, and the man the crime boss wants, he engages with a wide range of unseen New York: pool with the richest pool hall owner in the city, conversation with the cop who wants to take him down, dinner with a retired assassin and his family, and love with the woman his client said she was.

All along the way, he drops observations that are part of the reason Mosley is the best African- American novelist writing today:  “One day it came to me that the isolation and alienation of rush hour is like so many marriages I’ve investigated — a lifetime spent together in the same bed and still managing to keep separate and remote”; and “Blood may be thicker than water, but family has them both beat.”

As McGill works his way to a resolution, he encounters a dead body, hired killers, a hot limousine driver, a cult, and a little peace of mind about his father. Some of his problems are resolved at the book’s conclusion, and some take a surprising turn. Only a couple of things are certain at the end of the book — he found the killer, and he will be back.

1 Response to Back on the mean streets