Bob Moyer reviews the latest in a venerable series that’s long been one of my favorites. 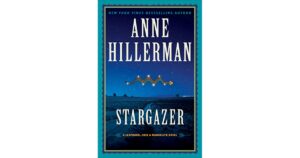 Any writer tackling the takeover of a series started by another writer usually has two challenges—keep the qualities that made it popular, and keep the series developing. Anne Hillerman faces another couple of challenges. She’s the daughter of Tony Hillerman, creator of the much-loved Leaphorn/Chee series, and she’s not a member of the Navajo Nation, where all the stories are set. In Stargazer, her sixth novel, the series’ 24th, she demonstrates how far along she has come in meeting those challenges.

Joe Leaphorn and Jim Chee, the mainstays of the series, still show up. Joe is retired, and a stroke has left him struggling with English, but not his native tongue. Jim has moved up in the Navajo Nation police, sitting in for the force’s captain. They are in supporting roles in this story, however. The heavy load is carried here by Hillerman fille’s addition to the series, Bernie Manuelito. A minor character created by Tony Hillerman, Bernie now is a major player in the series, a police officer married to Jim Chee. After an unusual day, in which she discovers a dead baby and a woman bound to a chair, she is called to help in the investigation of what might be a murder. It turns out to be the estranged husband of her best friend in college, Maya. Before the investigation has even started, Maya confesses. Something doesn’t seem right about her admission, and the rest of the book revolves around Bernie’s search for the truth about what really happened.

The victim was an astronomer at the VLA (Very Large Array) radio telescope near the Navajo Nation, the Stargazer of the title. Bernie’s search includes a lot of travel across the Nation, and her journeys give Hillerman a chance to compare modern astronomy to that of the ancient stargazers. Her vivid description of the stars and the countryside under them fulfill the expectations of series fans, land where “First Man covered it with a turquoise blanket, decorated the slopes with dark mists and fable rain, and anchored it to the earth with a stone knife thrust through the sacred mountain from top to bottom.” In passages like this and others, the author pays homage to her father and the People.

The plot doesn’t quite meet up to past exploits, however. Hillerman’s scenario builds to a “Don’t go there!” moment that telegraphs the real killer. It’s a minor blemish, but one that tells us the daughter has not quite caught up to her father yet. Nevertheless, the book will satisfy fans and first-timers, and includes a poignant afterword about the origins of the story.