Choosing the words, telling the stories 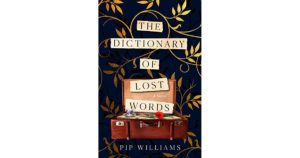 The Dictionary of Lost Words is also a book for our times – really, a book for all times. The questions it raises about the power of words, and the importance of who gets to tell the story, are just as relevant today as they were back in the 1880s and into the early decades of the 20th century when a team of men was laboring over the first Oxford English Dictionary.

Those men who eventually produced the “definitive” dictionary of the English language got invaluable assistance from women – volunteers, contributors, family members – who shared none of the credit.

This novel is soundly based on historical fact. If you’ve never read – as I had not – anything about how the OED was put together, you will find that part of the story fascinating. Williams does a marvelous job of making the work of the dictionary integral to the novel’s larger story.

The lexicographers devoted years to the effort, working in the “Scriptorium,” a garden shed in Oxford, England, behind the home of James Murray, the primary editor. Responding to an appeal from Murray, people across England and around the world mailed in slips of paper with suggested words, often just clippings from some publication.

The postcard-size slips of paper would be reviewed and, if accepted, filed in bundles in pigeon-holes in the Scriptorium. Sometimes slips, carelessly handled, could drift astray.

The dictionary, years behind schedule, was published initially in fascicles –  installments, or volumes. Sometimes by the time a fascicle emerged, developments proved that some editorial judgments had been wrong and omitted words should have been included.

In 1901, an inquiry from a reader revealed that the word “bondmaid” had been omitted from the 1888 first volume, A-B, not by editorial decision but because it was somehow, inexplicably, lost.

From that footnote of history, Pip Williams conjures up her story. The word “bondmaid,” in Williams’ fiction, was taken by a girl who spent much of her childhood beneath the sorting table in the Scriptorium.

Esme’s mother died in childbirth, so Esme’s father often takes the child with him to work in the shed behind the Murray’s home. Until she grows too big, Esme spends hours quietly beneath the table, soaking up the atmosphere of that room where people devoted their lives to words. Though she may not make much noise, she’s bright and inquisitive. One of the life lessons she learns early – and painfully – is that some words are more important, more powerful, than others.

When the slip with the word “bondmaid” on it floats to the floor one day, young Esme retrieves it. Usually when a slip is dropped, the person working with it picks it up, but not this time. Esme assumes it’s a duplicate or a reject  and not important. She doesn’t  really mean to steal it.

But later it turns out that she is, secretly, responsible for the error. Because she learns that the word means slave-girl or bonded servant, an objectionable idea, she’s glad it didn’t make it into the dictionary. Lizzie, a servant who works for the Murray family and is the closest thing Esme has to a mother or big sister, muses that “bondmaid” is what she, Lizzie, is, and seems glad to have been – almost – mentioned.

From this beginning, Esme resolves to collect words that are left out of the dictionary. Often, the  words relate to the lives of women and those on the margins of society. Esme begins secretly to compile her own “Dictionary of Lost Words,” those rejected because they are considered vulgar or improper, or unimportant, or are only spoken rather than written. They are, she realizes, words that have much to tell us. Toward this end, she ventures beyond her sheltered life in the Scriptorium and at school and learns a great deal more about the world.

One person Esme meets, an actress named Tilda, introduces her to the cause of women’s suffrage. That struggle, the world of the theater and the Great War with its upending of British life all become part of Esme’s quest and of her life, with its ups and downs.

Williams, who was born in London and lives in Australia, beautifully blends the themes of the power of language, the implications of who gets to tell the story and the challenges women face. Wrap that all up into a carefully researched historical novel and a compelling, imaginative story of one woman’s life, and you get a novel that’s sure to please many readers.

One response to “Choosing the words, telling the stories”