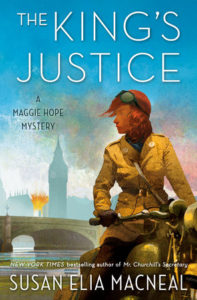 Over the course of eight previous novels, Maggie Hope has been an assistant to Prime Minister Winston Churchill, a code breaker, a spy, a prisoner…. She’s come way too close for comfort to a serial killer trying to emulate Jack the Ripper. She’s traveled from London to Paris and beyond, then to the White House in Washington after Pearl Harbor brings the Americans into World War II. In the process, she’s learned some difficult truths about her family, and she’s gained some insights into herself as well. Yet, as we see in The King’s Justice, she still has dangers to face and lessons to learn. That’s a good thing for all those who love this series.

As the book opens in London at the end of 1942, Maggie has sworn off spying for a while. She does her part for the war effort by working on a squad that defuses the many deadly bombs that remain across London since the Luftwaffe’s Blitz in 1940. Maggie loses herself at least briefly in this intense work that requires absolute concentration. At other times, she smokes, drinks and rides a motorbike dangerously fast through the streets of London to avoid thinking about all that she’s been through and the horrors she’s experienced.

Now, even as the brutal serial murderer she helped to catch and convict is about to be executed, a new serial killer begins an apparent campaign to claim even more victims – and notoriety. This time, people, including the mudlarkers who scavenge in the mud of the River Thames to find items they might be able to sell for a little cash, start finding suitcases filled with human bones. White feathers suggest the victims are men who are conscientious objectors avoiding serving in the military.

Maggie’s fledgling love interest, Detective Chief Inspector James Durgin, wants her to help him track down this new killer, but Maggie is adamant that she wants nothing more of spying or crime solving. Her resolve weakens, however, when Durgin asks her to help in the case of a rare Stradivarius that’s been stolen. And then the murderer who’s about to be executed suggests he has information about the new serial killer, information that he’ll give only to Maggie. Because some of the young men who work with her defusing bombs are conscientious objectors, she has a special interest in the case. Sometimes her personal feelings bring her into conflict with Durgin over the decisions he’s making about how to proceed with the case and how much information to reveal to the public.

Despite her resolve, Maggie gets drawn into these crimes, old and new. The more she learns, the more she suspects that the crimes are linked, and that there might be connections to her past as well.

Susan Elia MacNeal does a wonderful job with this mystery series, and as Maggie matures and experiences ever more, the novels are acquiring more depth. This time, we see more of the effects of war and violence on individuals, especially Maggie.

MacNeal’s attention to detail is a delight for people who like history. We get a real sense of what life was like for ordinary people, Londoners of Italian descent, government officials and even royals during those dark, interminable days of the war.

It’s not necessary to have read all the Maggie Hope mysteries that preceded this one to enjoy The King’s Justice. Those who haven’t had that pleasure, however, will probably want to go back and read more of the series. The rest of us will be eagerly anticipating No. 10.