I could be angry. I loved Tony Hillerman’s mysteries, reviewed many of them for newspapers, and even had the pleasure of meeting and interviewing Hillerman once. When his daughter, Anne, took up the torch and tried continuing her late fathers series, I reviewed her first couple of efforts on this blog. So how did Bob Moyer beat me to this one, and how have a missed a couple in between?

Instead of being angry, I’ll thank Bob, post his review and start looking for the books I’ve missed in this fine series. Leaphorn would be proud of me. 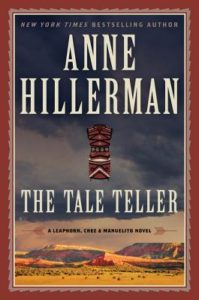 In this legacy series, Anne Hillerman has picked up the pen dropped upon her father Tony’s demise. Fans of the fierce Navajo duo Joe Leaphorn and Jim Chee watched with apprehension as the daughter took on the challenge of keeping the well-loved series alive. Now in her fifth effort, Hillerman shows she has done her homework and also has developed skill at maintaining the body of work her father created.

Reading The Tale Teller is like attending a family reunion. You recognize everyone, they’ve changed either a lot or a little, and it’s enjoyable catching up with them. The “legendary lieutenant” Leaphorn, retired, had a stroke, and the words that come into his head don’t come out well in English (his Navajo is still fluent).  Chee, still a traditionalist, has mellowed a bit, and is happier. He’s a life partner with the biggest change the daughter has made — Bennie Manuelito. Introduced by Tony long ago, she was always a minor character, never allowed to make an arrest. Now, she is a full-fledged partner in the narrative, especially in this latest installment.

The book starts off with three story lines. Leaphorn takes on a private case, looking for a missing valuable artifact sent to the Navajo nation. Bennie literally runs into a dead body while out jogging, and Chee investigates a robbery. Before long, Joe has a possible murder on his hands, Chee’s robbery escalates into a shooting, and Bennie has to wrestle with the FBI over the identity of the corpse. As the book progresses, two of the cases merge, while the third threatens to spiral into disaster. Hillerman moves smoothly among plot lines, and she keeps us interested.

She also writes with eloquence comparable to her father’s about the Southwest and the Navajo cultural landscape that the three protagonists patrol during their investigation. She carries on the sense of wonder her father invested in the series. Not quite as good as her father at dialogue, she nevertheless has become skilled at drawing upon the treasure her father left behind.

We can look forward to another reunion with anticipation, not apprehension.