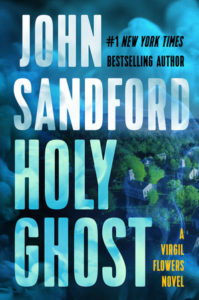 Virgil Flowers from the Minnesota Bureau of Criminal Apprehension is back in one of his best novels yet.

The setting is Wheatfield, Minn., a tiny, middle-of-nowhere town that’s withering away. But then a precocious (in more ways than one) teenage boy and the town’s mayor (nobody else wants the job) come up with a plan to put Wheatfield on the map and turn it into a lucrative tourist mecca.

When an apparition of the Virgin Mary appears at the local Catholic church, with the apparition caught on more than one cellphone, guaranteeing instant fame on social media, things begin to look up.

The town folk, including the teenage genius and the mayor, are raking in money from the excited pilgrims who trek to Wheatfield. Things are great, right?

But then the shootings start… At first, people from out of town waiting for the evening church service are shot, but not fatally, apparently at random. Virgil is called in, but he’s having trouble even figuring out where the shots are coming from. Then the shooter gets more accurate, and a loved and respected local widow is killed.

As the situation worsens, Virgil faces a truly puzzling challenge. In a town with many hunters, where more people than not are pretty good with a gun, it’s hard to narrow down the suspects. And what could be the motive? Maybe it’s just a crazy person with no motive, but Virgil doesn’t really think so.

Sandford’s Virgil Flowers series is thoroughly enjoyable. The books are police procedurals that are heavy on the mystery and the thought processes. Sure, there’s danger at times – in this book, one of Virgil’s associates gets hit by a hunting arrow – but this is not the sort of crime novel with some violent every few pages.

Virgil is thoroughly likable, if a little quirky. He does what he needs to, but he’s no super hero. The settings, in Minnesota’s small towns, farms and wild areas, are interesting, and Wheatfield has a full complement of characters with eccentricities – and secrets that just might add up to a motive.

But  when Virgil thinks he might have things figured out, he begins to worry that the murderer might just get away with it.

The audio version, read by Eric Conger, who’s a veteran with Sanford’s books, is a delight. No doubt the print version is equally enjoyable.