To have and have not… 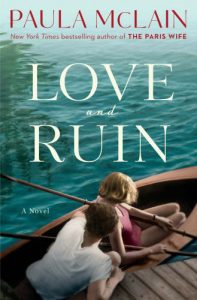 Paula McLain is brave, choosing to write historical fiction/memoir about well-known people about whom much has already been written and movies have been made. She’s also very good at what she does, and that’s why her books so captivating.

Her latest novel, “Love and Ruin,” is obviously a labor of love: McLain greatly admires and sympathizes with her protagonist, Martha Gellhorn, who has the rather dubious distinction of having been the third wife of Ernest Hemingway.

As McLain makes clear, Gellhorn would have liked that description.

Gellhorn lived to be nearly 90 and trekked the world covering wars for the better part of six decades.

McLain’s book, though it gives a brief account of the rest of Gellhorn’s remarkable life in an Author’s Note, focuses on the stormy years when she was involved with Hemingway, from their meeting in Key West in 1936 through their affair, marriage, separation and divorce in 1945.  She writes about their love, but also their rivalry, ultimate betrayals and the choices Gellhorn had to make to be able to pursue her remarkable career.

McLain has dealt with Hemingway successfully before, in her best-selling “The Paris Wife,” about Hadley Richardson, the first Mrs. Hemingway.

She obviously has done extensive research into both Hemingway and Gellhorn. What makes her novels succeed is that, while staying true to what is known, she lets her imagination fill in the conversations, thoughts and emotions that aren’t a part of the record.

Gellhorn’s story would be fascinating enough for several books even if she’d never become involved with Hemingway. A well-bred doctor’s daughter from St. Louis, her independent, determined, ambitious nature got her into adventures and predicaments.

Before she met Hemingway, she’d had an unhappy affair with a married man, and that experience left her wary. At first, she tried to convince herself and others that she and Hemingway – who was several years older and called her “daughter” in those early days – were just friends. He was already a famous author, and she was flattered that he noticed her and enjoyed talking with her.

But when they found themselves together in exciting and dangerous circumstances covering the Spanish Civil War, friendship became something more.

Hemingway was still married to his second wife, Pauline Pfeiffer, the mother of his two younger sons.

McLain takes us into the relationship as Gellhorn and Hemingway become increasingly involved and eventually marry. Though their passion was strong, the relationship was never easy. They were, in many ways, rivals, as Gellhorn fought to make a name for herself both as a fiction writer and as a war correspondent.

When Hemingway published For Whom the Bell Tollsto great acclaim, she struggled with feelings of envy and insecurity. Hemingway loved to party and seemed to have a great need for public acclaim, while Gellhorn often would rather they could just be alone together.

Most of all, she wanted to pursue her own career, but that ambition, too, caused friction, because Hemingway needed the adulation not only of his fans but also of his wife.

The accounts of Gellhorn’s adventures as a war correspondent are well worth reading.

So are the passages where she struggles with decisions about whether and how to balance her life so that she can have both her career and her marriage. Occasionally, the terminology sounds as though it belongs in a feminist debate a few decades later, but for the most part Gellhorn’s dilemma is convincing.

This is a very good book about a remarkable woman, a pioneering and courageous journalist, and the tumultuous years when her life was caught up in the world of a remarkable, complex man. Both were strong personalities, forces of nature, and their coming together makes for a tumultuous story.

That story, with lots of action and adventure as well as emotion, lends itself well to the audio book format. January LaVoy does an outstanding job of narrating this fine historical novel.