Briar Patch Books is the beneficiary when Bob Moyer goes on a reading/reviewing tear. Here’s his latest contribution. 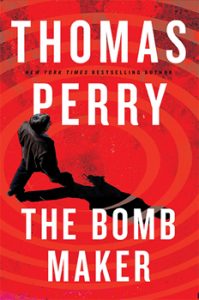 Thomas Perry usually writes thrillers that, like the standalone The Old Manor the series with Jane Whitefield, take your breath away from turning the pages so fast. The Bomb Makeris different.

This book makes you hold your breath.

He builds intricate bombs with astonishing kill capacity, and then delivers them in an intricate plan that blows up as many of his intended victims as possible. He has only one chosen target — the LAPD Bomb Squad. When 14 of the squad die, the authorities call in Dick Stahl, former commander who runs his own consulting firm. He proves to be a perfect foil for The Bomb Maker: He understands how to put a bomb together, how to take it apart, and how to get inside The Bomb Maker’shead.

Of course, it’s not smooth sailing to the noisy conclusion. Politics forces the police to remove Stahl from his position, with drastic results. Stahl himself complicates the matter by developing a bond with one of his team members, which puts her in harm’s way.

It’s that relationship that brings depth to the characterizations here. It’s quite a deep bond, beyond a one-night stand because of his strength: “She had realized within fifteen minutes that her only chance of making it to the end of watch that night was to do what he asked and to make herself be what he wanted. She had to see with her perfect vision into a dim space and extract the component he wanted out, reach into the hell-made contraption farther because her hands and arms were smaller and thinner… She had concentrated on seeing exactly what he saw and thinking what he thought.”

To bolster his efforts, The Bomb Maker sells his services to an unidentified foreign country, which both bankrolls him and backs up his effort to eliminate Stahl. He’s a formidable foe for Stahl, and Perry details the cold-blooded killer’s exacting process:  “He brought out ammonium nitrate, acetic anhydride, paraformaldehyde, distilled water and boron fluoride. He was going to have to do lots of stirring and heating and cooling for the next part of the process, which had to be done within very narrow temperature ranges…” and so on for another half-page. Passages like those make the reader grateful that Perry, not they, went into The Bomb Maker’smind to get them.

The conclusion features an explosion in which “…the body parts had been thrown too far, or the force and temperature at the center of the explosion had cremated the men and scattered their ashes.”  Then, and only then, can the reader take a breath.

This entry was posted in Police procedural, Thriller/Suspense and tagged The Bomb Maker, Thomas Perry, thriller reviews. Bookmark the permalink.