Bob Moyer may have been traveling in Japan in real time, but in his reading world, he’s been in post-war Germany, courtesy of the latest in one of his favorite series. 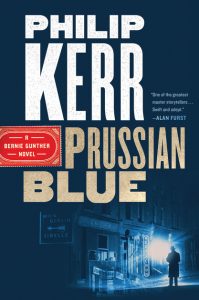 In this now-venerable series, Bernie Gunther has made his melancholy way from Berlin cop to valued investigator for the Nazis to a concierge alias Walter Wolf on the Mediterranean coast. In the last installment, that cover was blown.

Now, Erich Mielke, deputy director of the East German Stasi, orders him to murder a spy in England. Mielke is a real life figure, like many that author Kerr works into his fictional web. To “convince” Bernie, and to keep an eye on him, Mielke brings along Kerr’s creation Friedrich Korsch, a Nazi cop turned Stasi muscle — and Bernie’s former partner in a Nazi murder investigation. Korsch’s presence sends Bernie into even deeper despair:  “It was strange the way he had entered my world again after all these years, and yet not strange at all, perhaps. If you live long enough you realize that everything that happens to us is all the same illusion, the same shit, the same celestial joke. Things don’t really end, they just stop for a while and then they start up again, like a bad record. There are no new chapters in your book, there’s just the one long fairy story — the same stupid story we tell ourselves, and which, mistakenly, we call life.”

Bernie takes off, not wanting to play a part in Mielke’s fairy tale. As he races toward the German border, he reaches into the past to recall the case in which he partnered with Korsch. Korsch becomes the thread that ties Bernie’s escape in the present to his excursion into the past, and makes this a two-for-one tale.

Back in 1939, Reichsfuhrer Heydrich had ordered Bernie to investigate a sniper killing at Berchtesgarden, Hitler’s monumental retreat in the mountains. The Nazis spent millions on it, “Money that could have been spent on something more important than the comfort of the madman who now ruled Amer —(oops, Freudian slip) Germany.”  The Fuhrer’s safety has been compromised, and Bernie has only days to solve the mystery before Hitler arrives. Of course, he must do so while negotiating the politics of the powerful surrounding Hitler. As usual, Kerr uses Bernie’s investigation to throw light on the horrific history of the Nazi regime. As Bernie travels through the rooms and rumors of Hitler’s aerie, he uncovers uncomfortable truths that endanger him at every turn: a brothel run by Hitler’s doctor, paybacks to high officials, use of the drug Pervitin, abuse of that same drug, and the bitter struggle between two of Hitler’s most trusted advisors, the Borman brothers.

With Germans all around him, Bernie might not escape alive from France. Although disguised successfully as a Frenchman (“All I needed now was to neglect my personal hygiene, and to obtain a service medal for a war I hadn’t fought in.”), he can barely evade the French police complicity with the Stasi. Tension builds as he nears the border.

Back on Hitler’s mountain, the tension builds as Bernie nears the truth. Of course, that’s not what his superiors want; Hitler said “…it’s not truth that matters, but victory.”  As one official says after Bernie finds the “truth,” “The status quo is restored… The important thing in concluding a case successfully is actually concluding it.”

Korsch was close beside Bernie on the mountain, but he’s closer behind him in France. Needless to say, this is a series and Bernie survives — until he gets a new identity in Germany. Bernie Gunther and Walter Wolf are dead — long live Christof Ganz!

This entry was posted in Thriller/Suspense and tagged Bernie Gunther, Philip Kerr, thriller. Bookmark the permalink.