Lifestyles of the rich and vapid 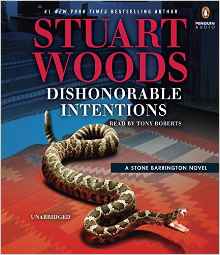 When a prolific author cranks out books in a series with astonishing rapidity, a reviewer is often left with little to say other than that those who like this series will probably like the latest offering. That’s true unless the latest offering is not really up to par, which I fear is the case with No. 38 (but who’s counting?) in Stuart Woods’ Stone Barrington series. This one may be worth a listen, but probably not worth a read.

The basic elements are here in Dishonorable Intentions, of course: Stone, a former New York City detective turned incredibly wealthy lawyer who doesn’t ever seem to do much work, lives a life such as most of us could hardly imagine. Flying his private planes, he jets around the world to his various luxurious homes. He’s first-name or even more intimate friends with all sorts of people in high places, including the (female) president of the United States. Money is no object. Servants take care of most of life’s troubling necessities. Stone and his friends can eat and drink lavishly, never gain a pound and only occasionally suffer even a minor headache.

And there’s sex, of course, lots of sex, but all very polite. Women – wealthy, well connected and elegant, of course – just fall into bed with Stone.

In the better books in the series, all this elegant and indulgent lifestyle is the backdrop for some sort of crime that Stone, often with the help of his buddy and former NYPD partner Dino (now New York police commissioner), must solve.

But this time out, Stone is just trying to deal with the annoying, not to mention dangerous, activities of the Russian ex-husband of his current lady friend, Gala, who seems even shallower than the usual eager beauty. The couple jets around trying, in vain, to lose the angry ex and his Russian mob henchmen. Along the way, they have some largely gratuitous sex adventures involving a highly placed third party, an arrangement that strains credulity. Would a woman with a highly sensitive job really put herself at risk in this way?

As an audio book, Dishonorable Intentions is a reasonably amusing way to spend a few hours while, for example, traveling. Tony Roberts’ reading allows us once again to gape at a fantasy lifestyle. With no real plot, though, the print version would offer little incentive to keep turning pages.

1 Response to Lifestyles of the rich and vapid