I didn’t read Sara Gruen’s 2006 novel Water for Elephants, but I heard high praise for it from a number of people. Back then, I was editing and writing for a newspaper’s weekly book-review page, and I rarely had the luxury of reading a book that someone else was going to review for me. It went on the list of books I mean to read one of these days, and it’s still there.

When Gruen’s new book, At the Water’s Edge, arrived as an audio book, I could hardly wait to listen.  When I did, my reactions were decidedly mixed. 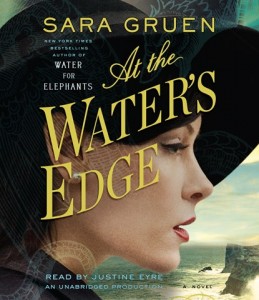 Maddie Hyde and her husband, Ellis, are a young, spoiled couple who live in the home of and firmly under the thumbs of his well-to-do parents in Philadelphia. World War II is raging toward its end, and Ellis has greatly disappointed and embarrassed his father, a former Army colonel, by being found ineligible for military service because he’s colorblind – a condition that, oddly, had never before been detected.

The uneasy relationship between the elder and younger Hydes reaches the breaking point after Ellis and Maddie disgrace themselves at a New Year’s Eve party at a high-society home. When the young couple is called on the carpet, the end result is that they find themselves tossed out of the house and bereft of the lavish allowance that has supported their lifestyle.

Ellis decides that the only way to prove his courage and salvage his relationship with his father is to go to Scotland and find the Loch Ness Monster, something that his father tried and failed – notoriously – to accomplish years earlier. His inseparable best friend, Hank, helps arrange an improbably passage by ship to Scotland for the two of them and, of course, Maddie. After a rough journey, they find themselves staying at the only accommodation available in the village near the loch, an old inn with few amenities.  Making matters worse, food is rationed and air raids necessitate nightly blackouts and occasional trips to a bomb shelter.

The local customers and the sparse staff at the inn have nothing but contempt for the obviously spoiled young Americans who are off on a lark while the young men they know are dying in the war or coming home with serious injuries.

Ellis, especially, and to some extent Hank do nothing to change the locals’ bad opinion. Supercilious and demanding, they are the ugliest of ugly Americans.

Maddie, though, often left alone at the inn for days as the two men pursue their adventures, gradually comes to know the young women who work there, others in the village, and, eventually, the brooding man who runs the inn.

The book has possibilities. I’m a fan of historical novels that combine fictitious characters, even a romance, with real events and people. But the characters and plot must be believable and compelling for this sort of novel to work.

Before talking about the book’s flaws, I will say that I listened to the end, and that doing so was not a waste of time. This book is one of those that is better, I suspect, in its audio version. Justine Eyre did a lovely job with the Scottish accents, a delightful element that would have been missing in my own reading of the book. The story overall was interesting enough to keep me listening, but I think the flaws would have made me set the print version aside as not worth the effort.

My biggest problem with At the Water’s Edge may be that I was never able to believe the central premise: that finding the monster would put Ellis back in his father’s good graces, or even that Ellis believed that it would.

That problem is compounded by the way Ellis quickly deteriorates into a cardboard character, a thoroughly depraved one, once the trio arrives in Scotland, and Hank is little better. Even as Maddie grows in depth and self-awareness, the young men become stereotypes.

The latter part of the book becomes mostly a predictable, rather formulaic and contrived romance novel with some rather confusing supernatural elements thrown in. The news from the front, played on the inn’s radio nightly, the telegrams announcing war casualties and the occasional air raids are just interesting enough to make one wish Gruen had done more with that part of the story.

The story’s symbolism – that there are very real monsters (Hitler, Ellis) around us – is presented with a heavy hand, and also stated outright in case the reader still doesn’t get it.

A historical novel about hunting for the Loch Ness Monster might have worked. There have been many successful novels set during World War II, and there’s always room for another. A romance with an evil husband and a gallant lover with a mysterious past could have been fine for those who like that sort of book. But these elements never really come together to make At the Water’s Edge the book it should be.