With all the emotion and aura of Saturday’s annual Army-Navy game fresh in my mind, I’m reviewing a recent novel set at the Naval Academy in the  (Go Navy, Beat Army!) late 1980s-early 1990s. 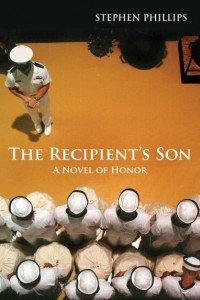 Reviewers try, but I don’t think it’s possible to remove ourselves from the background we bring to a book. In the case of Stephen Phillips’ second novel, The Recipient’s Son, the background I bring is that of having been the parent of a midshipman at the U.S. Naval Academy from 2006-2010.

So try as I might, I don’t know how much someone who has only superficial impressions of the academy would enjoy this book. My best guess is that the writing, plotting and underlying themes of the book are strong enough to hold the interest of any reader who likes a good coming-to-manhood story, one with plenty of conflict and emotion. Certainly, this book should be enjoyed by any fan of earlier books and movies that provide a realistic look at our military.

As someone who has spent a good bit of time at the academy and even more listening to my midshipman talk about his challenges, defeats and triumphs there, I was fascinated by Phillips’ close attention to detail. He brought the buildings, monuments, quirks and routines of the yard back to life for me.

I did wonder whether certain plot developments were plausible. At those moments, I reminded myself that Phillips is writing about a different era than the one I experienced. His protagonist enters the academy the same fall that my son who would later be a midshipman was born. Things are always changing. Then too, there’s the reality that some of the incidents Phillips writes about are things that no self-respecting midshipman would have told his mom. To his credit, he paints a realistic picture: The mids may look pristine in their white uniforms, but they are real human beings.

And that setting in the late ’80s and early ’90s is important to the plot. Among the things that change are definitions of what’s acceptable behavior from upper-class mids toward plebes, and what’s acceptable behavior between male and female midshipmen. Something that was considered part of normal training at one point might be regarded as harassment several years later.

This novel’s main character is Donald Durago, whose father, killed in the Vietnam War, had been awarded the Medal of Honor for his actions as a POW. Durago has grown up knowing next to nothing about his father, but he learns that as the child of a Medal of Honor recipient, he is eligible for appointment to the Naval Academy. He accepts the appointment because he doesn’t have anything better in mind.

Once there, Durago struggles even more than most plebes. He doesn’t really want to be at the academy, and it shows. He’s in danger of being kicked out when a Navy master chief takes him in hand. Slowly, Durago grows to understand his father’s real legacy, and he begins to value what he’s learning about honor and service. That doesn’t mean, however, that he always follows all the rules.

During Durago’s senior year, an unexpected development once again puts him in danger of being “separated” from the academy. When he was a plebe, he wouldn’t have cared much. Now, however, being expelled from school and denied the opportunity to serve his country as an officer would be devastating.

Phillips does a good job of showing what is admirable about the academy without glossing over its problems. The academy endures, but the people who make up its leadership and its student body change. It’s not always clear what  leadership, duty and honor dictate, and sometimes course corrections are needed.