This isn’t really a Christmas book, if by Christmas books you mean those novels – usually fairly slim and quickly read – with a holiday theme that appear in the fall, just in time to be read or given as gifts.

But what else do you call a novel with a main character named Father Christmas? And how else do you classify a novel called Eleven Pipers Piping, the second in the series that started with Twelve Drummers Drumming?

Yet classification isn’t really the point, is it? This book would be enjoyable at any time of year, and readers stressed by the pressures of the Christmas season might need an engaging mystery now more than ever 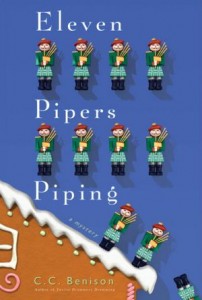 C.C. Benison’s second Father Christmas mystery is just as engaging as the first. These books are reminiscent of Agatha Christie’s mysteries: Father Tom Christmas lives in an English village, Thornford Regis, with a full complement of village characters and side stories. There is, of course, a murder or two involved, but the narrative does not elaborate unnecessarily on the violence. Blood and gore, if any, are offstage.

The important elements are the mystery, the well-developed characters and the village atmosphere, all of which Benison handles expertly. The mystery unfolds with enough twists and turns to keep readers guessing until a satisfying denouement. Even minor characters are thoughtfully drawn, never easy stereotypes. Benison is writing about today’s England, so we have cell phones and encroaching development, but a village is still a village.  And, bless him, Benison gives us a “Cast of Characters” list, something that all well populated mysteries ought to provide.

Tom Christmas is not Hercule Poirot or Miss Marple, but he’s worthy of their legacy, in his own, low-key way. He’s an Anglican priest who sought refuge for himself and his young daughter in Thornford Regis after his wife was murdered in a senseless crime. His strong sense of right and wrong, sin and redemption, draws him into unraveling the murders that violate this refuge. His vocation also gives him keen insights into the flawed human beings he deals with – including himself.  His reawakening interest in the opposite sex helps to make him believably human.

This particular mystery starts when Tom’s role as chaplain to the local Scottish bagpipe band requires his attendance at the traditional Robert Burns Supper on the night of a blizzard. The owner of the village hotel where the dinner is held goes missing before the night is over, only to be found dead in the hotel’s tower. His death proves to have been murder, a development that throws the village into a turmoil, unearthing all manner of secrets and problems. Even Madrun, the housekeeper at the vicarage, comes under uncomfortable suspicion.

A Burns supper, bagpipes, wassailing, mysterious strangers, old grudges, love, humor, tragedy – it’s all here, wrapped up in an expertly crafted plot. Whatever the season, a Father Christmas book is a gift to the reader.