I hope those who have access to the Greensboro News & Record will read a column I wrote on today’s Ideas front. The article talks about the importance of a new book written by members of the U.S. Naval Academy class of 2002, which I review briefly below.

It also gives information about two appearances this week in the Piedmont Triad area by Graham Plaster, one of the four class members who edited the book. Plaster will be at the Wake Forest University Bookstore on Hearn Plaza on the campus from 4-5 p.m. Friday, Nov. 16, and at Barnes & Noble at 3102 Northline Ave.,  Friendly Center, in Greensboro at 2 p.m. Saturday, Nov. 17.

I urge people in the area to go hear him, buy a copy of the book, and read it. Proceeds go to help veterans. 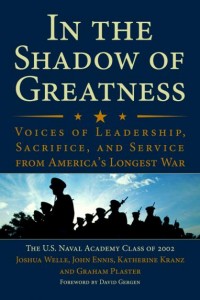 The title of this book refers to the “greatest generation” – those who grew up during the Great Depression, fought World War II and came home to build a country that led the world. Deservedly, they have been much honored and written about.

The young Navy and Marine officers who collaborated on this remarkable book grew up in the shadow of that generation, hearing about the sacrifices and leadership of their grandparents. They also grew up, although they don’t say so in their essays, hearing that such greatness was of the past, that today’s youth are coddled and spoiled, selfish and self-centered.

In an epilogue to the book, Adm. Mike Mullen writes that the generation represented by the USNA Class of 2002 really is the next “greatest generation.” The stories they tell here lend credibility to his assessment.

I bought two copies of the book at the urging of a fellow Naval Academy alumni mom on the academy parents’ e-mail list. I kept one and sent one to my son, a 2010 graduate, now a Navy lieutenant junior grade. As I am not a big fan of nonfiction, I wasn’t sure I’d read the book, but I did begin leafing through it. Before long, I had tears in my eyes, and I was rushing to read chapter after chapter.

The significance of the class of 2002 quickly becomes obvious: These young men and women had decided to accept appointment to the Naval Academy, thus committing themselves to at least five years service in the Navy or Marines, during a time of peace. But as their senior year was just getting started, planes hit the Twin Towers and the Pentagon, and another crashed into a field in Pennsylvania. They became the first class since Vietnam to graduate into a full-fledged war with the expectation that they would spend most if not all their service in war.

Several years after these men and woman had graduated and been commissioned, when they had fulfilled their basic obligation and some had left the service to pursue civilian careers, class leaders decided they had stories worth telling. They sent out a call to their classmates. One of the original ideas was to write a book, even a textbook, about leadership, drawing on the lessons they had learn. As things turned out, the writers teach about leadership in a much more effective way than any textbook could, by describing decisions they made and actions they took in real-life situations.

The result is a book of 33 personal essays, most written by class members, a few written by relatives of those who have died. It was one of the latter, written by the mother and sister of a Marine, that had me in tears.

These are by no means all stories of combat and the front lines of the war, although those accounts are here, with details and insights you won’t see in the movies. Though some of those who became Navy officers did serve in Iraq or Afghanistan, more of them served on ships and submarines around the world, or flew planes or helicopters on other missions. And not even all Marines were sent to the front.

The great variety of personal stories in this book reminds us of the many roles our military forces serve at home and around the world: flexing the muscle of the United States when necessary, and being a force for good when possible. They also remind us – a reminder that’s needed, when so few Americans have a loved one in the military – of the real sacrifices made by those who serve and their families. And because the people who wrote the essays are bright and thoughtful, they naturally reflect on how their time at the academy – the leaders they met there, the sometimes maddening and seemingly pointless training they endured, and all that emphasis on character and honor – has influenced them when they were in the fleet or the corps, and even in the civilian world.

Read this book. It may make you rethink your opinion of the younger generations, and it will remind you why we honor those who serve our country.

This entry was posted in Contemporary Nonfiction, Military History and tagged In the Shadow of Greatness, Military, Naval Academy, Veterans. Bookmark the permalink.