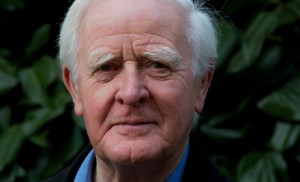 John le Carre began writing what are loosely classified as spy novels in 1961, long before I was old enough to read or understand his writings. Since then, he’s published more than 20 novels. Now that I’ve discovered them as audiobooks, I can’t wait to listen to all of them. These books may have spies in them, but they transcend genre. They are fine literature.

I think I read one or two of le Carre’s books years ago. By the time I became the editor of the book-review page at the Winston-Salem Journal, a position I held for 25 years, the grand dame of book reviewers, the late Betty Leighton, had staked le Carre out as her territory. I didn’t have a chance of getting my hands on review copies of any of his new books that reached my office.

All this is background for why I am delighted that Penguin Audio has been releasing recordings of many of le Carre’s books over the last few years, just as I have become a great fan of audiobooks. Betty Leighton is now no doubt in some heaven lined with good books, and I review books for this blog (and other publications from time to time) rather than for the Winston-Salem newspaper. So it is my pleasure to snatch every new le Carre audiobook as it arrives and spend the next several days listening to it raptly whenever I’m on the road alone.

Readers who know le Carre’s work don’t need me to tell you what they’re like or how good they are. Suffice it to say that if you haven’t read them in a while and have occasion to listen to audiobooks, these books on CD will provide a rare treat. Listening to these novels as opposed to reading the print version is more than satisfactory. It is addicting. Occasionally, I find myself wishing I could thumb back through actual pages to sort out a minor character whose name I’ve forgotten, but usually, if I keep listening, all comes clear. Michael Jayston, a noted British actor, reads all seven le Carre books I’ve listened to recently, and he does an outstanding job. The voice and mannerisms he gives to George Smiley, le Carre’s unlikely hero, are so perfect that I’m sure if I watched any of the movies that have been made of the novels, I’d consider the actor playing Smiley an impostor.

What le Carre fans know, and what those new to him will discover, is that he does not write spy novels along the lines of James Bond. Smiley is pudgy, owlish and not at all glamorous. Everyone who knows them is surprised that his beautiful and stylish wife married him, but not so surprised that she has cheated on him shamefully. The spy “game” that he and his colleagues in British Intelligence play doesn’t involve high-tech gadgets; tedious surveillance operations are more likely than speeding car chases. Some of the books are long and complex, and they are carried along more by subtle plotting than by dramatic action.

But Smiley is also very perceptive, and dogged when he’s pursuing a possible traitor or trying to solve a death that doesn’t make sense. And he’s a man with enough conscience and intelligence to understand that the world is much more ambiguous than a good spy should believe.

The books are set during the Cold War and, later, its aftermath. Smiley and other leading characters for the most part do their jobs, but they also grapple with troubling questions. In a world of double and triple agents, it’s often difficult to sort out right from wrong, good guys from bad guys. Who really won the Cold War, and what was the cost of victory? What, for that matter, is the personal cost to a man who lives most of his life as a lie? Who can be trusted, and what drives people to betrayal? What is right, and what is moral? Are the victories achieved worth the costs, to individuals and to the nation? Are the victories even victories? If the spies must destroy British values to save Britain, what is gained? And aren’t the American “cousins” making the same mistakes, only on a larger scale?

Beyond such thought-provoking, sometimes haunting questions, these books are lifted to the level of fine literature by le Carre’s exquisite style. He writes in a way that is both understated and profound, making the most of small details deftly described. This subtle writing comes across evocatively as read by Jayston.

John le Carre is the pen name of David John Moore Cornwell, now 81, who says on his website that he is not a spy turned writer but a writer “who when I was very young, spent a few ineffectual but extremely formative years in British Intelligence.” He suggests that if you want to know more about his early life, you should read (listen to) A Perfect Spy, an insight that makes that fascinating novel even more interesting.

Here is a list of the books I’ve listened to, all recently issued by Penguin Audio. I recommend any and all.  I’m eagerly awaiting any new arrivals.

A Murder of Quality. 4 CDs. 5 hours. $29.95. This second novel takes a satirical look at an upper-crust British private school as Smiley unofficially helps solve the murder of a faculty wife. 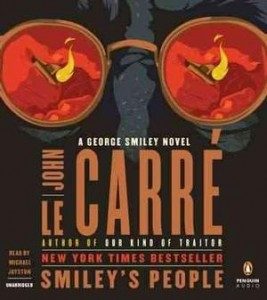 Smiley’s People. 12 CDs. 13 ½ hours. $39.95. These three books make up the Karla triology, in which Smiley, pushed out of “the Circus” by younger officials, is heading for retirement. But he learns that there’s a Soviet mole at the highest levels of British intelligence, and that the double agent is linked to his longtime nemesis, the Soviet known as Karla. Smiley goes after the mole, and stays around to deal with the havoc  the scandal causes in the British Secret Service – and to come to terms with Karla.

The Secret Pilgrim. 12 CDs. 13 hours. $39.95. An agent who was helped by Smiley early in his career, decades ago, relives his own career when he invites Smiley back to speak to young trainees.

A Perfect Spy. $49.95. This is the book that le Carre points to as his most autobiographical, at least as far as the early years of the hero, Magnus Pym, are concerned. Be warned: It’s not about George Smiley, and the plot is a little slow and meandering, though worth the journey. Pym, a veteran agent, goes missing after his father dies. What we learn about his early life and how he came to join the Secret Service raises questions about what makes a good spy – and whether that distinction is something to which anyone should aspire.