Mortality in the bayous

In case anyone wonders about the high-tech and high-brow credentials of this blog, I am posting a picture of how books for review are exchanged. 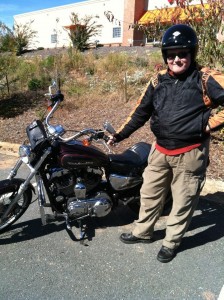 In this picture, you can see Bob Moyer and his Harley, which he recently rode to Walnut Cove, N.C., for an editorial meeting with me. After a delicious lunch of chicken livers, turnip greens and cucumber salad at Duke’s Restaurant in the Cove, as we locals affectionately call this village of 1,400 to 1,500 souls, Bob loaded up his saddle bags with half a dozen books for review and roared off toward the metropolis of Winston-Salem. While we await his judgments, here’s the last of the reviews he sent from his recent sojourn in Europe, where they eat foie gras instead of chicken livers, and the turnip greens aren’t nearly as good.

Deputy Sherriff Dave Robicheaux knows fear, from his days in Vietnam and his current job, fear that “…makes your hair soggy with sweat and turns your skin gray and fouls your blood and spiritually eviscerates you to the point where you cannot pray lest your prayers be a concession to your conviction that you’re about to die.” 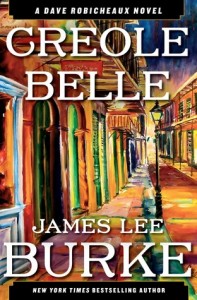 He has seen Death, pulling out of the swamps on a paddle-wheel steamboat to take him and his sidekick Clete aboard after their last shootout. Somehow they survived, and Dave ended up in a rehab center in New Orleans’ Garden District, where he still sees things – Confederate soldiers drinking coffee in Audubon Park, men in bowler hats, women with parasols and, “…on the edge of my vision, the onset of permanent winter (waiting) for me.”

Under the influence of morphine, he is not surprised when the talented Cajun singer Tee Jolie Melton shows up by his bedside, says she is scared because she knows something she shouldn’t know about the big oil well blowout, and that she’s carrying a married man’s baby.  She gives Dave an iPod with My Creole Belle and other songs on it, and leaves.

The next day, Dave learns no one has seen Tee Jolie in a month, and no one can hear any music on the iPod but Dave.  Everyone says he is hallucinating, but Dave has learned “…never to doubt the existence of unseen realities that can hover like a hologram right beyond the edges of our vision.”

When he gets out, he keeps looking for Tee Jolie, and she keeps contacting him on late-night phone calls no one else hears. He’s just trying to find her, but someone thinks he’s onto something else. Two crooks start extorting Clete, then end up shot dead by a new contract killer named Caruso. Dave traces the extortion plot back to Alexis Dupree. He’s the patriarch of a St. Mary’s Parish plantation built on the bodies of slaves and kept running by their descendants working for slave wages. Dave collects evidence and ever-increasing threats, all which lead him to believe that Dupree family members are involved in extortion, art forgery, and the sex trade. They have gotten in deep with international forces that threaten Dave, Clete and their families at every turn.  Dupree himself has roots in the Nazi concentration camps, and Dave soon concludes that he and his son are evil, “…a validation of Hitler and Himmler’s belief that pure evil could be passed on through the loins.” The sins of the father are visited upon the son.

And visited upon the landscape as well. Burke trumpets the same message with his exquisite prose time and again.  Damage done to the bayous he loves so well was “..not the result of an individual act…; it had been done collectively and with consent, the damage it had caused was ongoing, with no end in sight.” To Dave, whose Dad died in a blowout, the word “spill” just doesn’t suffice to describe the threatened destruction of the “…thousands of square miles that are the greatest argument for the existence of God that I know of.”

Burke suffuses the narrative here with Dave’s sense of mortality, and his struggles with the “…addiction that laid waste to my life but still burns like a hot coal buried under the ash, biding its time until an infusion of fresh oxygen blows it alight.” As he and his buddy Clete hurtle towards a conflagration of a finish, Clete reminds him the paddle wheeler is still out there, “…waiting for us in the fog.”  This time however, both men fear that the boat will take Dave’s wife and daughter, as well as Clete’s illegitimate daughter.

Never fear, Robicheaux fans.  Dave finds Tee Jolie, and she writes “…the fifth act in our Elizabethan tale on the banks of Bayou Teche.”  Like any such tale, it is full of sound and fury, but leaves everyone in good enough shape to head to the beach when it’s all over.  It’s the calmest conclusion to a Robicheaux novel in years, and a break both readers and he need.  Laissez les bon temps rouler!