Is there romance in Doc Ford’s future?

I did this all backwards. The news here for fans of Randy Wayne White is that he’s introduced a new character, a woman who just happens to have an interest in Doc Ford, the hero of 19 suspense novels by White.

I stumbled upon Gone, the book introducing Hannah Smith, grabbing up the audio version one day when I was going to be driving and wanted to listen to a book.

But I’d never read anything by White, although I know people who enjoy his books.  Apparently, lots of people do – he’s a fixture on The New York Times bestseller list. With no background, I was a little puzzled by a character who played a minor role in the story, a marine biologist named Dr. Ford, and his aging hippie friend Tomlinson.

Fortunately, I had in my stack of review books the 19th installment of the Doc Ford series in audio form, which was published in March. (See how far behind I am?) So when I finished listening to Gone, I did a little catching up.

Those who are already fans of Randy Wayne White don’t need my recommendation to read his new Doc Ford book. But I will encourage them to give the new character – Doc’s potential girlfriend – a read as well.

And I recommend the new series to suspense/mystery fans who haven’t already tried White’s books, especially women readers who like stories with women detectives who are strong and resourceful but still believably female. Like me, they might be intrigued enough to go back and pick up a few Doc Ford books, just to get to know more about this guy who might be in Hannah Smith’s life as her series continues.

Here are quick looks at the two books: 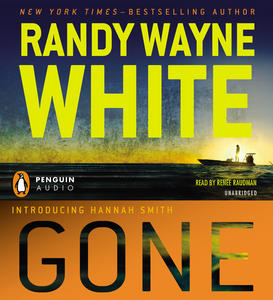 Hannah Smith has lived in Florida all her life, part of a family that’s legendary in Florida history. She’s the latest in a series of women in the family named Hannah, and as such, she has quite a reputation to live up to.

Living on the Gulf Coast near Sanibel Island, and she earns her living as a fishing guide. She’s Capt. Hannah Smith, thank you. Her uncle left her the business, and he also left her his small detective agency, for which she’d done some work, mostly of the computer-search variety. Hannah helps take care of her mother, who’s pretty sharp despite a touch of dementia.

Tall and athletic, Hannah still sees herself as the acne-scarred, awkward girl who was not in the popular set in high school. Nowadays, though, men tend to see her in a different light.

Hannah has met all the requirements to be an investigator, but only because her uncle insisted. Being a fishing guide is all she wants to do, even though money is tight in the off season.

Then one day a fishing client, impressed by her resourcefulness and courage in a sudden storm, makes her an offer: His niece, an heiress about Hannah’s age, has gone missing, and he thinks she may be in the clutches of a con man. Would Hannah make discreet inquiries? She’ll be amply rewarded.

Reluctantly, but with thoughts of the young woman troubling her, Hannah begins to nose around. Soon she unearths interesting and disturbing information about the missing woman and the man who probably lured her away.

Her quest takes her to the playgrounds of the rich, deep into the mangrove swamps on the edge of the Everglades – and into terrifying danger.

As in the Doc Ford series, White writes evocatively and knowledgably about the Florida Gulf Coast – the natural world, the world created by humans, and the often volatile interaction of the two.

Randy Wayne White has created a likable and believable heroine in Hannah Smith. Not unlike Sue Grafton’s Kinsey Millhone, Hannah comes across as a real person, a woman who is tough when she has to be, but who doesn’t seek out violence. Under the no-nonsense exterior, Hannah is sensitive and emotionally vulnerable. She has a well-developed sense of honor and integrity. And she’s definitely interested in seeing more of the marine biologist who used to own her boat – Doc Ford. 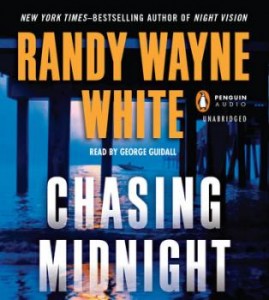 Doc Ford has wangled an invitation to a private Florida island where a Russian billionaire who notoriously deals in black-market caviar is staging a big event. His unpredictable friend Tomlinson, an unreconstructed hippie, is there too, and things begin to get problematic when members of a radical environmentalist group with whom Tomlinson has had some dealings arrive as party crashers.

As Doc tries to check out the Russian’s yacht under cover of darkness, things go very wrong. The power goes off on the island, all communications are down, and people are shooting at one another.

Scrambling first to save his life, and then to find out what’s going on, Doc discovers that some of the so-called environmentalists have taken guests at the party hostage and are threatening to kill then one by one. And then at midnight, something disastrous is supposed to happen that may destroy everyone. International rivals of the Russian, invited to the island apparently for some major announcement, may be involved or may be plotting mayhem of their own.

Racing against the clock, Doc Ford tries to save lives, figure out what’s supposed to happen, and sort out who’s friend and who’s foe. As fans of the long-running series know, Doc Ford may be a marine biologist when he’s in Florida, but he’s been a dangerous government agent in the past – and his past is never far away.

The action is fast-paced and often violent. The villains are memorably frightening.

The book has much more to offer than suspense, violence and action. Readers (listeners) will learn a lot about the threatened environment of Florida and beyond, and, like Doc Ford, when the shooting subsides, they will find themselves thinking about morality, ethics and human nature.

1 Response to Is there romance in Doc Ford’s future?