Here’s a new review by Robert Moyer of Winston-Salem, who’s been traveling and reading.  Keep watching: In the next few days we’ll have a post by a reviewer who is new to Briar Patch Books. 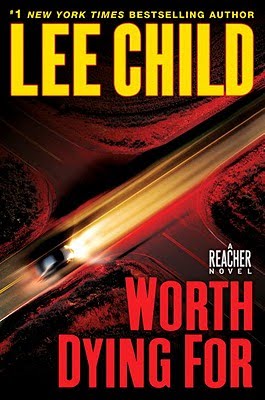 That’s when fans of Lee Childs’ Jack Reacher find out what happened to him.  In the last installment’s cataclysmic conclusion, the steadfast ex-soldier was possibly blown up, and definitely blown out of an underground complex, leaving debris and bodies and several federal agencies shaking their heads.  Of course, everyone knows he will survive, as this series garners growing sales and critical reception.  We just don’t know how he did it until page 128, when he tells a doctor about his wounds.

Reacher hasn’t had time to think about what happened.  We know he’s in trouble when a sniper sets up across from a barn in the middle of a Nebraska field, expecting a “large man in a brown coat” to show up.  He will, and so will the barn, at the end of the book.

It seems that Reacher, while trying to hide on the plains, stumbles across a whole county under the thumb of three bent brothers who own a trucking company.  Reacher thumbs his nose at them when he breaks the nose of their adopted son.  Reacher has a shorter fuse than usual; he just stands the guy up and pops him one for abusing his wife.  Reacher takes off, trailed by a herd of beefy ex-Nebraska Cornhusker football players in four-wheel vehicles.  The happiness of pursuit lies in Reacher’s unending variety of ways to reduce the herd’s size.  Along the way, he picks up on the mystery of a little girl who went missing years ago, and he won’t let go.

Unfortunately for everyone but him and the reader, Reacher has interfered with the delivery of contraband the brothers are bringing across the Canadian border.  Before long, the herd of beef is joined by three pairs of gangsters from Las Vegas.  Needless to say, the violence quotient expands exponentially, as Reacher takes advantage of some fortuitous elements in the plot to render them dead.  Very dead.

Reacher takes no credit for coming up with the solution to the contraband or the missing girl; he credits “happenstance and luck.”  We know, however, that Childs’ ability to get Reacher into situations we love watching him get out of is neither — it’s exceptional skill.  Like all the other books in this series, Worth Dying For is definitely worth reading.

This entry was posted in Mysteries, Thriller/Suspense. Bookmark the permalink.