Sometimes I choose to listen to an audiobook because I figure I’d never read the print version. That’s especially true in the case of serious nonfiction books. Perhaps because I worked in the newspaper business for so long, I have a difficult time making myself read nonfiction for pleasure.

I started listening to the book I review here for that reason: I was interested enough in the story of the spies who helped make the D-Day invasion a success to want to learn more about them, but I feared I’d find the book slow going. I’d be more likely to stick with it if I was listening myself while commuting in my car, when I’d be bored without a book.

Before I was very far into the book, however, I realized I had been wrong in this case. Not that the audio version isn’t good; it’s great. But the story is so fascinating and so well told that I do believe I would have read it in print form with relish. The only problem would have been that I would have neglected everything else I needed to be doing in my non-driving hours. 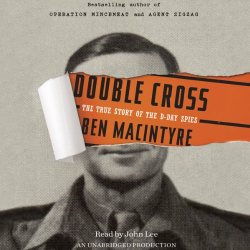 Most people know, at least vaguely, that a great deception helped secure the success of the D-Day invasion that was crucial to the Allied victory in World War II: Hitler believed that the Normandy operation was merely a diversion, not the primary invasion. Consequently, his forces were scattered in the wrong places, and the Germans did not have sufficient troops in Normandy to fight off the Allies when they stormed the beaches.

How in the world did the deception, code named Operation Fortitude, work?

Ben MacIntyre, British journalist and author, tells the incredible story in his new book, Double Cross. As you listen to or read his behind-the-scenes account, you will be amazed even as you are fervently thankful that a crackpot scheme carried out by such a motley assortment of people could work.

Double Cross is anything but heavy, slow history. It’s one of the best stories I’ve read in a long time. It’s also, partly because of MacIntyre’s wit and way with words, but mostly because of how preposterous the truth is, often downright funny.

With the blessings of Gen. Dwight Eisenhower and Prime Minister Winston Churchill, the spymasters at Britain’s MI5 relied heavily on a group of double agents they had cultivated for several years. Amazingly, every spy the Germans had sent to Great Britain had been “turned” and was actually working for the Allies. These spies, still trusted by the Germans, regularly fed false information that was crucial to the D-Day success. Some of them were helped by a network of imaginary spies they had created.

And what a bunch of spies they were. The five most important were a bisexual Peruvian playgirl and gambler, heiress to a guano fortune; an eccentric failed Spanish chicken farmer who had a lot of trouble with his wife; a volatile former fighter pilot whose primary allegiance was to Poland; an international playboy who ran up huge bills everywhere he went; and an emotionally unstable French woman whose love for her little dog almost derailed the whole effort.

Their code names were Bronx, Garbo, Brutus, Tricycle and Treasure. And in the end, there was a sixth spy, whose courage was ultimately crucial despite his evident weaknesses.

How and why these oddly assorted people became not just spies but double agents makes up a good bit of this remarkable story. Their MI5 handlers were interesting in themselves, and the lengths they went to in dealing with their temperamental charges make for more good stories.

Then there are tales of the double agents’ dealings with their German handlers. Some of these accounts bring up visions of Mad Magazine and “Spy vs. Spy.” The British gave their agents invisible ink, instructing them to write “normal” sounding letters and then write secret messages between the lines. The Germans told the agents the same thing. In one encounter, a spy was given a supply of German invisible ink when she already had a bottle of British invisible ink in her purse.

The Double Cross double agents weren’t the only part of the deception, of course. MacIntyre also deals with how the disgraced Gen. George Patton flamboyantly led his completely nonexistent Army, making sure to create headlines that would be relayed to the Germans. He tells us about the two-bit Australian actor who nervously doubled as Field Marshall Montgomery – after he was fitted with a fake finger to make up for the one he had lost in World War I.

And then there are the pigeons. A special unit of MI5 focused on making double agents of British pigeons they could use to infiltrate the German homing pigeons in occupied France, in hopes of rendering the Germans’ pigeon messengers useless. They chose only inferior British pigeons for the project, because the really good pigeons would have been made it back to England rather than taking up with pigeons in France.

John Lee, an actor and playwright who obviously enjoys performing in a variety of accents (his American accent is amusing), does a good job of bringing the story to life for listeners. But the story told in Double Cross really needs no help. This is history at its best: well researched, enlightening and a delight to read.

Because the Double Cross spies helped the Allies prevail on D-Day and in the weeks that followed, we have the luxury of reading this book, laughing and marveling at how this great, unlikely deception contributed to one of history’s great military feats.