They make a case, but it’s hard to listen to it

Paul O’Connor is back in North Carolina, back in the UNC classroom, and back in the midst of the noisy political season. 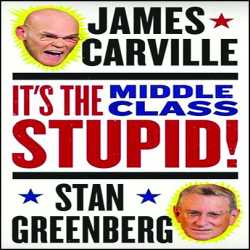 The middle class is getting screwed, and that’s been happening for decades now.

The rich are getting richer and greedier, and the Republican Party plans to destroy the middle class, giving what is left of American wealth to the rich.

For those interested in hearing those story lines told in various forms over six compact discs, this is their book. As for me, this dizzying presentation of data compiled by the two Democratic consultant-authors, interspersed with James Carville’s humor, hyperbole and histrionics was too much like watching a Rachel Maddow Show weekend-long TV marathon.

This book just wore me out. I stopped listening after five CDs.

And forgive me for that, because the authors make a persuasive argument – supported, of course, by my reduced paycheck, smaller IRA and shrunken house value.

Maybe the printed version would be more manageable. You’d have time to study the numbers, absorb the arguments and, more important, stop worrying about running off the road – I listen while I drive – when Carville suddenly jumps into the narration thus waking you from the sleep into which Greenberg’s voice has lured you.

This co-narration adaptation of the print version doesn’t work. It’s hokey. The two were much better on the one-hour public radio interview program in which they appeared in July. They made their major points and were done.

But, so far as the substance is concerned, they make a case. The middle class is under attack. Our wages are falling in real terms, and conservative policies threaten to harm us more. The cost of a college education – the ticket to the middle class and the credential needed to stay there – is rising while the states reduce their subsidies for in-state students. And, if you’re poor, the government is devising numerous approaches to keep you from voting.

I get all of that. But as someone who covered a mostly Democratic-controlled General Assembly for almost 30 years, I can say that a lot of this happened on the watch of North Carolina’s conservative Democratic legislature. The problem is not just Republicans. It’s Democrats, too.

The authors recognize that culpability at various points, especially when they report that the American people don’t trust government. (I’d heard something about that before.) They heard it from focus group members who said the game is rigged against them no matter what program is instituted.

A good friend heard that I had this audio book and wanted to borrow it. She’s a nice person with a lot on her mind. I did her a favor and said no. This book is really only for those who will watch four hours of non-stop MSNBC campaign programming and then go searching for more after 11 p.m.