To laugh or not to laugh

Jesse Kellerman may know the business of writing best-selling novels as well as anyone. For him, it’s a family business; he is a son of Jonathan and Faye Kellerman, both highly successful crime writers. And he’s followed in the family tradition admirably with four novels: The Executor, The Genius, Trouble and Sunstroke.

Sometimes, after a few bestsellers, an author will come out with a book of a different sort. It may really be that first novel, the one that never found a publisher. Or it may be something in a different genre that probably wouldn’t get a glance if the author didn’t already have a record of success.

John Grisham might never have been able to publish his sports-related novels Bleachers and Calico Joe, or his story about life in rural Arkansas, A Painted House, had he not had smash hits with legal thrillers. I’m glad he did.

As for Jesse Kellerman, it seems that having established himself, he has now indulged himself. 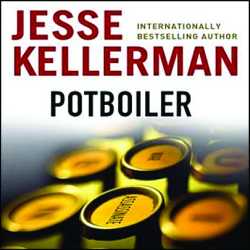 I listen to audio books while driving by myself. Books nicely fill the time spent in a car alone. If I’m lucky and the book is good, I’m enlightened, inspired, enriched or at least entertained.

When a captive, so to speak, in the car, I’ll try books on CD that I probably would not pick up when stealing a little time to sit down and read a book in print. Often, serendipity results: I enjoy – and learn a lot from – a nonfiction tome that I had feared might be intimidating, or I discover a wonderful novelist I’d somehow missed.

So when Jesse Kellerman’s latest, Potboiler, arrived, I gave it a try. I like a good thriller every now and then, and Kellerman certainly has the credentials.

And then there was that line on the cover about this book offering “a hilarious spin on the modern blockbuster thriller.” What’s not to like, I thought, about a thriller that also pokes a little fun at the genre?

The story, read ably by Kirby Heyborne, started out well enough to hook me.

Arthur Pfefferkorn has always thought of himself as a writer, although he hasn’t published a thing since an early literary novel that passed into oblivion after a few good reviews. He teaches writing to undistinguished students at a third-rate college. From time to time, he has an idea for a new novel, but nothing ever comes of these inspirations. Meanwhile, his friend since childhood, William de Vallee, is wildly successful as a writer of thrillers – even though de Vallee clearly has little or no real literary talent. (Just ask Pfefferkorn.) When de Vallee is lost at sea in a boating accident, Pfefferkorn reconnects with his widow, Carlotta. When the three were young, Pfefferkorn had secretly loved Carlotta, but he stepped aside when she fell for de Vallee.

While visiting Carlotta at the palatial de Vallee estate in California, Pfefferkorn gives in to temptation and steals de Vallee’s last, nearly completed manuscript, which he believes no one has read.

That action sets off a mind-boggling chain of events that goes on for many, many chapters.

Jesse Kellerman is bright, clever and quick, and he clearly knows the ins and outs of the world of popular fiction. What he set out to do here almost works. Almost.

Some of Potboiler is laugh-out-loud funny. It’s a satire, spoof, parody, whatever, of authors, would-be authors, poorly written thrillers, writing classes and the publishing world.

But it goes on way too long. The joke outlives its humor. And somewhere toward the middle of the book, Kellerman loses control and direction. If he had stopped with a novella or even a longish short story, Potboiler could have been great. Instead, he proceeded to write a full-blown thriller, in which the bumbling professor is repeatedly plunged into dangerous international intrigue in “a world where no one can be trusted.” Many plot twists and reversals ensue, described in such over-the-top prose as:

“If Pfefferkorn was shaken before, he was really quite badly shaken now. He was like a martini inside a rock tumbler being held by a detoxing epileptic standing on stilts atop a trampoline inside the San Andreas fault.”

Even as he plows on into some semblance of a thriller, Kellerman is still indulging in hyperbole and satire. The reader/listener ends up somewhat confused and impatient. The book borders on the silly rather than the satirical. And then there’s the ending ….

When the book was done, I decided that listening to it had been marginally better than listening to news accounts of the election on the car radio. But I was awfully glad that I had not shelled out forty bucks for the experience. And had I sat down with the print version, I would never have made past the halfway point.

I would, however, like to try one of Kellerman’s more conventional thrillers. And I suspect that, having gotten this send-up of publishing and thriller-writing out of his system, he’ll go on to produce some really good books.