Justice, present and past

Bob Moyer touched down in North Carolina just long enough to write reviews of the books he’s been reading while on his travels. Here’s one of a police procedural that meets his discerning standards. He’d give it two thumbs up if he weren’t too busy holding onto his luggage. 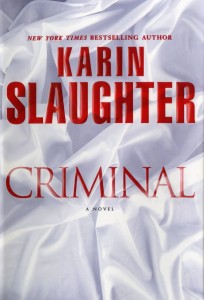 Drawing upon exhaustive research (4½ pages of acknowledgements), the author brings telling detail to this police procedural, which moves back and forth between two similar murders, one in 1975, one in the present. Even more to her credit, Karin Slaughter integrates the detail and the movement from past to present into this tale of Will Travis, a Georgia Bureau of Investigation agent with a bright future and a dark past; and Amanda Wagner, his supervisor and GBI deputy director.

Slaughter doesn’t weigh the story down, and she moves back and forth in time without losing the reader. By the end of the novel, we know much more about who Will and Amanda are and where they came from.

We also know more about Lucy Bennett, kidnapped in 1975.  Slaughter excels at the slow reveal, letting out tantalizing details about her kidnapper’s techniques, and many other questions as well: What are both Amanda and Will doing in his old orphanage late at night?  Why has she taken him off the case in the present? Will his dark past poison his relationship with the beautiful pediatrician? How does this recent murder, which looks like Lucy’s, relate to Will? The author parcels out pieces of the puzzle adeptly.

Amanda and her partner back in the ’70s persevere in spite of official disapproval and outright harassment, while police in the present keep an eye on the likely killer. No one seems to care about three prostitutes who disappear in the ’70’s; everyone worries about the college girl who disappears in the present. As the story progresses, it becomes clear that Will would not be here unless Amanda and her partner had kept up their pursuit; in the present, Amanda faces the challenge of bringing the killer in – again. Slaughter doesn’t let up at the conclusion, however; justice descends upon the killer and his cohorts from around a corner this talented writer has kept hidden quite adeptly.  To reveal that conclusion would be – well, CRIMINAL.