On part of his cross-country drive this summer, Paul O’Connor was accompanied by Gail Collins, a well-known New York Times political columnist. Well, Gail wasn’t really in the car with Paul, but her voice was, reading her latest book on CD. Its subject is a big one: Texas, and its influence on American politics. And it gave Paul a lot to think about. 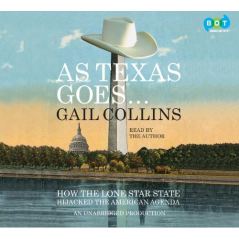 In spring 2009, when I read that Texas Gov. Rick Perry had told a Tea Party rally that he might support a Texas secession movement, my stomach sank: “Not this, again.”

But after I gave it some thought, considered how Texas influence hangs over our country in mostly a negative way and how much I hate the Dallas Cowboys, I had a change of heart.

“Leave, please leave,” I yelled back at my copy of that day’s newspaper. “I’ll sign the petition right now.”

For Americans who share my sentiment, Gail Collins, political columnist for The New York Times, has just released a six-hour explanation and rationale for our support of Texas secession. It’s a whack-a-doodle state from a public policy standpoint, and it’s dragging the rest of us down a great many undesirable paths.

Collins opens with an insightful analysis of the deep divide in American civil society today. A big part of the population lives in cities and suburbs and those folks look to government to keep things organized so they can live in harmony, on a 1/5-acre lot, next to their neighbors.

The other folks live in wide-open spaces where people feel they are better suited to handling things themselves. And Collins rightfully notes that in many places the government can’t serve the purposes it serves in cities – fire, police and ambulance services, for example, in the middle of North Dakota.

Those who live in Texas, a state where 80 percent of the people live in cities and suburbs, live, however, under the myth that they are in the wide-open spaces. So, they don’t like zoning or rules. It’s a free-for-all, anti-government place.

That free-range spirit in an urban state isn’t the only contradiction. Texans hate the federal government for all sorts of reasons, with Texas politicians constantly complaining that Washington seeks to steal their liberty. But it is Texas that has an outsized influence on Washington, both through their senators and representatives and through in-state policies.

The Texas disgust for the federal government overlooks, of course, the great wealth that Texas collects from the rest of us. National taxpayers paid to bring electricity to the state, and they have built a huge network of interstate highways. Texas has one of the largest federal workforces in the nation and benefits greatly from all the military bases there.

Collins goes into great detail about how Texans were behind the federal savings and loan disaster, the banking and mortgage meltdown of 2007 and No Child Left Behind, which has proved pretty unworkable.

While Texans don’t like taxes, they also don’t like to provide services. Collins explains how the schools and most social programs are starved for funds, how the sick go untreated and children who do not live in the best suburbs get a substandard education. To fill the state’s need for college-trained workers, the state imports tens of thousands of graduates educated in other states, by other taxpayers.

Collins reads the book herself, which works especially well. She is able to provide just the right inflections to her snarkiness. It’s almost fun and enjoyable to listen to this book.

But this book really isn’t fun because the corporate-run, right-wing state of Texas is essentially what America would look like if the Tea Party had its way.

I always admired Abe Lincoln, but sometimes I wonder if we wouldn’t have been better off if he’d just let Texas leave back in 1861.

This entry was posted in Audio Books, Contemporary Nonfiction. Bookmark the permalink.