What is literature for if not to take us into places and experiences that we might otherwise miss? I’m missing London right now; I see it nightly on TV coverage of the Olympics, and I wish I were there.

There’s no way I could make it to London for the games, but I’ve done the next best thing: I’ve gone on a surprising fictional adventure through the city with Bryant and May, the charmingly eccentric detectives of the Peculiar Crimes Unit. 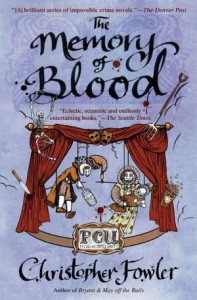 If you’re new to the Peculiar Crimes Unit mysteries – of which there are nine – this information might help you get a sense of what they’re about: Among the many awards Christopher Fowler has won for the series are one for the book that booksellers most enjoy selling and Crimefest’s Last Laugh award for the funniest mystery novel.

Yes, these books are funny, even though they deal with heinous crimes – among them, in this installment, the murder of an 11-month-old baby – and even though their leading characters battle loneliness, fear of aging, declining health, faulty memories and other human frailties.

The PCU is as odd a police unit as its name suggests. Its origins date to World War II, when it was felt that London’s Metropolitan Police Force needed help. The word “peculiar” initially was meant in the sense of “particular,” and the unit’s mission was to handle, discreetly, sensitive cases that might harm public morale. In more recent years, its cases have tended to become more peculiar in the sense of strange or eccentric. The lead detectives, longtime partners Arthur Bryant and John May, become ever more peculiar themselves as time wears on. Their approaches to solving crimes are at best unorthodox; they have a cavalier attitude toward the usual rules and regulations.

For various reasons, including fear of embarrassment and fear of what the PCU might turn up, the more conventional powers-that-be try frequently to disband the unit. Somehow, they never quite succeed, and it appears that the PCU might go on as long as the aging Bryant and May hold up.

In The Memory of Blood, the unit is called in after the infant son of Robert Kramer is shaken to death and tossed out his bedroom window. The crime takes place during a party at the Kramer apartment celebrating the first play being produced in the theater the wealthy Kramer is opening. The room from which the baby was tossed is found locked; the parents have to break in. And the perpetrator of the terrible crime appears to be a large, grotesque puppet of Mr. Punch.

Everyone at the party is a suspect, but it’s difficult to figure out who had a motive, not to mention the opportunity to slip into the baby’s room and leave it locked.

Bryant employs his vast knowledge of esoteric information while the rest of the unit tries more conventional detecting methods. Meanwhile, more deaths occur, with Punch and Judy puppets on the scenes.

The unit realizes it’s battling a cold, shrewd serial killer. It doesn’t help that one of the newest members of the theater company is the notoriously wild daughter of a leading government official. Nor does it help that Bryant is more than a little distracted by the sudden death of the young woman who was helping him with his biography – and the disappearance of the disc with all his reminiscences on it, including some potentially explosive and classified material.

The theater murders are so baffling that even Bryant and May worry that this might be the case that does the unit in – and the case in which a cruel murderer goes free. The younger members are starting to think about finding new jobs.

Then Bryant and May make one, last, grand, desperate attempt to find the elusive truth.

This is an ingeniously plotted tale, with all the London atmosphere and the complexities of human nature any fan of British police mysteries could want. And then there’s the peculiarity, and the humor. The Memory of Blood is top-notch literary entertainment.