Looking at the face of evil

IN THE GARDEN OF BEASTS: LOVE, TERROR, AND AN AMERICAN FAMILY IN HITLER’S BERLIN. By Erik Larson. Crown Publishers. 363 ages. $26, hardcover. Also available in paperback. 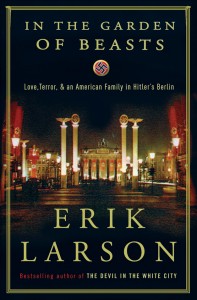 In his narrative histories, Erik Larson has written about a mass murderer in Chicago and a hurricane that destroyed Galveston, Texas, and he says he has always been able to maintain an emotional separation from his research material.

But while preparing to write In the Garden of Beasts, Larson admits, he could not maintain that separation. He grew so depressed that his material repulsed him to the point where he regularly turned one of his key reference books upside down on his desk so he would not see the face of evil on its dust jacket.

That evil was Adolf Hitler, and this latest Larson book is about the year during which the Fuhrer cemented his power in Berlin and led the world into the monstrous catastrophe of World War II.

Larson tells this story through the family of the new American ambassador to Nazi Germany, William E. Dodd, who arrived in Berlin in mid-1933, along with his wife and adult children, a son and daughter.

While the Dodds would stay in Berlin for several years, this book covers only the first year, the time during which the ambassador and his daughter, Martha, grew to recognize the insanity and criminality of Germany’s leaders.

The story has its salacious side. Martha was very much a liberated woman, a practitioner of free love well before Woodstock. She initially saw the German government favorably, and she conducted an affair with the head of the Gestapo for a number of months. There were many other men, as well.

The ambassador, a political appointee with no diplomatic experience but a top American historian who had made his name as Woodrow Wilson’s biographer, is not so naïve as his daughter. But Dodd also fails to see, at first, that the warnings of Nazi terror being reported by his career diplomatic assistants are indeed valid.

Over time, all of the Dodds come to see the evil, and the book culminates in what has become known as The Night of the Long Knives, the weekend in June 1934 when Hitler and his henchmen consolidated their power, murdering probably thousands of real or imagined challengers both within the Nazi movement and without.

In this book, readers can expect the same kind of meticulous research evident in other Larson works. He can write his histories like works of fiction because he collects a wealth of original source material. He combs diaries, letters, interviews and memoirs to be able to reconstruct dialogue, physical descriptions and inner thoughts.

This form of history writing challenges us in a key way. Larson does not lay out for us, the way a conventional historian would, the key points he seeks to make, and then follow with evidence to support. Instead, like a novelist, he recounts events, and they lead to the dramatic conclusion.

Americans are often puzzled by the rise of Nazi Germany. They ask how such a cultured, sophisticated and civilized people could have allowed their government to fall into the hands of such beasts and how they, themselves, could have then supported those animals so strongly.

Larson does not completely answer that question in this book, but he provides us with some insight into it. It’s another masterpiece from Larson.