Fresh from his triumph at the opening in Winston-Salem of the delightful show from his art collection, “Howard Sam and Bob – A Life With Relics,” Bob Moyer has written a pair of reviews of works by one of his (many) favorite authors. He takes a look at the new print novel out from Johnathan Kellerman, as well as a graphic novel adaptation of one of Kellerman’s early books. In the process, he seems to draw some sort of comparison between his reaction to the graphic novel and my fondness for audio books. I don’t completely follow his train of thought, and I suspect he’s poking fun at me me, but I’ll let him get away with it. Since he’s Bob. 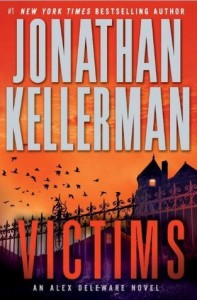 “This one was different.”

So begins the latest Alex Delaware adventure, which is, indeed, different. No Delaware girl friend subplot, no diversion with LAPD Lt. Milo Sturgis’ boyfriend, not even any lengthy meals at Milo’s favorite Indian restaurant. Just a murder so gruesome that Milo calls Dr. Alex Delaware in to view the murder scene, in order that he might plumb the depths of degradation the killer had brought about – an eviscerated corpse with internal body parts discreetly arranged around and on the body. Everyone, including Delaware, turns away upon seeing it.  So precise, so exacting – the killer knew what he was doing.

And then he does it again. And again.

Before Milo and Alex can get their usual handle on the crime, more murders occur. The two long-time collaborators can’t come up with any connection between a curmudgeonly matron, an innocuous accountant and a brusque doctor. Pressure from police headquarters builds quickly as the bodies pile up. In the usual formula, Milo stitches clues together with threads of supposition provided by Alex.  As usual, premises that show some promise unravel one after the other as the narrative progresses. Finally, Alex finds a thread that leads them through a thicket of improbabilities to a stunning revelation about the identity of the killer. Unlike the usual hidden resolution that Alex springs on us, or the slow revelation that Kellerman sometimes employs, this conclusion comes cascading down on the reader. It’s as breathtaking a ride as Kellerman has come up with in recent novels, and anyone suffering Kellerman fatigue will find it refreshing.

Or they can turn to the graphic (in all senses of the word) novel version of one of Kellerman’s early successes, Silent Partner. The story stood well on its own. It’s early in the collaboration between Milo and Alex, and the story winds its way through the sex, scandal and blood of Hollywood high life. An old girl friend approaches Alex for help at a party. He turns her down, and she turns up dead the next day. His guilt drives him to delve into the murder, which he doesn’t understand, and their past together, which he also doesn’t understand.  Volatile, at times unavailable, at other times totally consumed by him, she is an enigma wrapped inside a bloody psychodrama.

A graphic novel is actually more like a script than a book, with the adaptor turning narrative into dialogue, the artist trying to capture the mise en scene.  I found it a bit disappointing, unlike Linda Brinson’s reaction to audio books (she enjoys voices on tape because she says they sound better than the ones in her head). In this instance, the graphic Alex doesn’t have the gravitas that I picture, and Milo isn’t the crumpled rumple of a human that I fondly envision. However, the multiple scenarios that Milo and Alex employ “with the aplomb of a pair of anthropologists observing a colony of savage baboons” are well served by the frame-to-frame frenzy here. 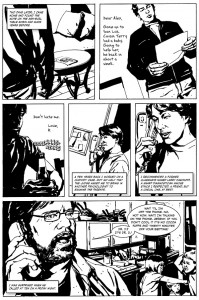 “Graphic” can happen in that expressionistic way that leaves so much to the imagination, a hand stroking a leg, splashes of ink suggesting blood in black and white.  As with any good production, timing is of the essence, and the story moves right along, not holding us too long with too much narrative at any point, nor making us grimace at the gore.  And it was a pleasure to catch up with an early novel that I hadn’t perused up to this point. Together with his latest, it was an enjoyable double dip of Kellerman.