It’s not easy being queen

Anne Barnhill is recuperating at her home in Garner, N.C., after having had surgery, but that doesn’t mean she’s stopped writing. Nor does it mean she has stopped reading. In addition to working on her next novel, Anne has found the time and energy to review some books, including this one for our blog. (Pardon the headline, Anne. Couldn’t help myself.) 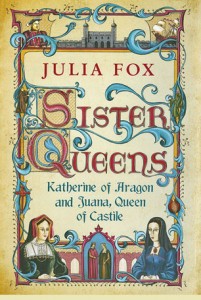 Julia Fox’s second book, Sister Queens, is an informative and interesting read for those who are interested in what life would have been like for those born into the luckiest of all circumstances – royalty. With great skill, Fox weaves together the stories of two of the daughters of the famed Ferdinand and Isabella of Spain.

One daughter has gone down in history as being mad, while the other has become almost the patron saint of women betrayed by their husbands. The first, Juana, marries Philip the Handsome, of Burgundy.  Their union starts out with great love and passion. Then, Philip dies and Juana carries his body around with her for years.  Both her father and her son, Charles, who later becomes Charles V, Holy Roman Emperor, are ambitious and ruthless.  They spread the rumors about Juana’s madness after her mother, Isabella, dies and she inherits her mother’s kingdom.  Neither father nor son wishes for Juana to take the reins of power, so they keep her a prisoner for most of her adult life, claiming she is too insane to rule.

The other sister is Katherine of Aragon, wife to Prince Arthur of England and later, more famously, first wife to Henry VIII.  Katherine has many pregnancies during her 24-year marriage to Henry, but only one child lives, a daughter, Princess Mary. Henry needs a son. So, when his eyes light upon Anne Boleyn, one of Katherine’s ladies-in-waiting, he begins his pursuit. Anne denies him.  No one can imagine the results of this one “no,” least of all Katherine the Queen.

Fox skillfully tells the story of these two sisters who, though born under fortunate circumstances, live lives full of grief and despair.  One is imprisoned, the other separated from her only child.  Both seem to have loved their husbands, men who proved unworthy of the love freely given to them.  Both share the extreme disadvantage of being women in an age when women were considered little more than chattel and breeding machines.  Fox’s portrayal is sympathetic yet backed with solid research.

Though nonfiction, the book reads with the intensity of a novel, mainly because of Fox’s appreciation and admiration for her sister queens, feelings that transfer through the writing.  Here’s a brief sample:

The wedding was supposed to take place … on October 20 .. .but … when Philip took one look at his beautiful bride, he wanted the union celebrated, and therefore consummated, earlier.  The physical attraction between Juana and Philip was immediate and electric; it was Juana’s misfortune that, for her, that initial spark could never be quite extinguished.  Philip of Burgundy, she would discover to her cost, liked women too much to be content with marital fidelity.

If you want to learn more about these two remarkable women and their stories, I highly recommend this book.

1 Response to It’s not easy being queen