Need Christmas spirit? Read (or listen to) this book

Talk about getting into the Christmas spirit: In the past couple of weeks, I’ve read two enjoyable novels in which a murder is committed at Christmastime in a large English country house where lots of people (i.e., suspects) are snowbound. Save from those details I’ve just listed, the two books could hardly be more different. One novel, reviewed here a few days ago, is Anne Perry’s annual holiday offering, with a Victorian setting and, more than in many of her books, a good flavoring of vintage Agatha Christie.

The one I review today is the fourth offering in Alan Bradley’s wonderful series of novels starring the incomparable, indomitable Flavia de Luce. Anyone who’s had the pleasure of meeting Flavia in Bradley’s previous books will know that, even placed within a story with familiar elements, Flavia will be wholly original. What a double pleasure: a new Flavia de Luce adventure that’s also a Christmas story.

Greedily, I enjoyed the book twice. Hardly had I finished reading the print version of the book when I was offered a review copy of the audio version. Even though I knew “whodunit,” I couldn’t wait to listen to the story. Part of my motivation was that I’m a sucker for British accents, but that wasn’t all. Bradley’s books have so many telling details and nuances that a re-reading (or hearing) yields many pleasures. I recommend treating yourself to this book before the holidays, one way or the other – or both. 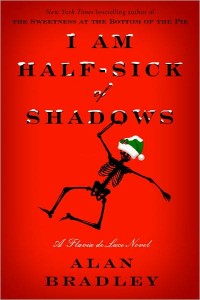 If you were Flavia de Luce’s parent, or the local constabulary in Bishop’s Lacey, you’d find the girl’s relentless – and sometimes dangerous – curiosity and sharp wits exasperating. As a reader, however, you have the luxury of pure enjoyment.

Flavia, as those who have made her acquaintance in any of the three previous novels know, is an 11-year-old scientist and sleuth. Despite her keen intelligence and (largely self-taught) expertise in the field of chemistry (and its subfield, her specialty, poisons), Flavia is also still a child, in a wholesome, 1950s way. She listens to the wireless, reads library books and magazines, and gads about the countryside on an old bicycle. She was kicked out of the Girl Guides for insubordination (no surprise there), but she managed to pick up some survival skills from them nonetheless. 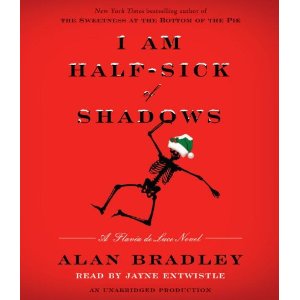 Flavia is also, often, a lonely child, who, despite having so many answers about some things, has many questions about others. The loneliness and questions are part of what make her so endearing. Flavia’s mother, the incomparable Harriet, died in a mountain-climbing accident when Flavia was a baby. Flavia is convinced that her two older sisters hate her, and her father, never having recovered from the cruel loss of his beloved, is distant at best. Their home, Buckshaw, is slowly crumbling around them because Colonel de Luce hasn’t the money to keep it up or the will to do much about the situation. The closest thing to a functioning parent Flavia has is Dogger, who served with her father in the war and now takes care of most things at Buckshaw, when he isn’t incapacitated by lingering effects of his days as a prisoner of war. Let’s not waste time being maudlin about Flavia’s circumstances, however. She certainly does not have time to wallow in self-pity! And doing so would hardly be the right thing for a British girl – stiff upper lip and all that.

Flavia has taken refuge in the distant east wing of the old mansion, where she uses her late great-uncle’s chemical laboratory to carry out her various schemes. This year, she’s determined to set a trap to catch Father Christmas, if he really exists.

But Flavia’s plans get complicated when her father, to raise some needed cash, allows a film crew to use the mansion as the setting for a movie, starring none other than the world’s most famous movie star, Phyllis Wyvern. After the vicar persuades Miss Wyvern to stage a benefit performance to help raise money to replace the church’s leaky roof, the blizzard intensifies, and most of the residents of the village wind up stranded at Buckshaw. Flavia, something of an old hand at solving crimes, finds that there’s plenty of sleuthing to be done after she discovers that murder most foul has been committed in one of the upstairs bedrooms.

Everything fans of Flavia have come to expect is here in this wonderful novel, with the added bonus of finding out the truth about Father Christmas.

Jayne Entwistle does a remarkable job of giving voice to Flavia, bringing to life the winning combination of precocious intelligence and childlike wonder, the determination and, above all, the humor. Flavia is irreverent, and, yes insubordinate. She’s good at making up white lies and knows the importance of crossing her fingers when making a solemn pledge she has no intention of honoring. She’ll make you throw up your hands in horror. She’ll tug at your heartstrings.  But, most of all, she will make you laugh. Entwistle gets this half-adult, half-child’s take on life just right.

3 Responses to Need Christmas spirit? Read (or listen to) this book