You may derive some odd comfort from a reminder that as crazy as our times seem, they fit right in with the story of American history. Steve Wishnevsky reviews a book that looks at a past America on the brink of a great war.

TWILIGHT AT THE WORLD OF TOMORROW: GENIUS, MADNESS, MURDER, AND THE 1939 WORLD’S FAIR AT THE BRINK OF WAR. James Mauro. Ballantine Books. 2010 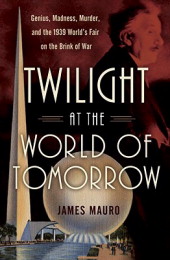 James Mauro is an editor for several glossy publications, but this seems to be his first full-length book. It is no The Devil in the White City, Erik Larson’s tale of the Chicago World’s Fair of 1893, and of a predator thereon. It is hard to tell what the focus of this book is; the times were chaotic, afraid to gel into the next stage of history, and as that next stage was World War II, justifiably so.

This book is mostly the story of three men, Detective Joe Lynch, NYPD; Robert Moses, Fiorella La Guardia’s parks commissioner; and Grover Whalen, dapper ex-police commissioner, man about town and tireless civic booster. The Chicago World’s Fair of 1933, “The Century of Progress,” had been a great success, artistically and financially, and the boosters of New York City desired some of that gravy.

Robert Moses, described as the most influential city planner and builder in history, wanted the project for his own reasons. There was a fetid swamp, a dump, in Flushing Meadows, and Moses wanted to redevelop it as a park. The quickest way to gain funding for such an undertaking, in the depths of the Depression, was to promote a World’s Fair on that ground and then take over the reclaimed land for his dream park. Oddly enough, that same man was to use that same land for another World’s Fair in 1964, again losing money and reputation on the project.

Whalen was quite the character, a self-made man of the kind we see no more. He started in a department store and somehow became responsible for seeing that civic parades went past his boss’s front door. He parlayed that role into public fame, becoming known for his waxed mustache, tuxedo and carnation boutonnière. For no particular reason, this fame led him to the job of police “commish” at the height of Prohibition, when his enthusiastic pursuit of low -level bootleggers brought him more fame and the enmity of more serious law-enforcement persons. At loose ends, he seized on the World’s Fair concept with enthusiasm, bravado and a complete lack of executive ability.

Joe Lynch was a working guy, old for his job, who lived a life touched with tragedy, a life that ended the same way.

This book is a fine portrait of a world on the edge of catastrophe, where the simplest action had international repercussions, and unknown forces lurked just off stage. It’s an inconclusive tale, but one well told. Recommended. And you should read The Devil in the White City too. America is made of dreams, whether realized or broken.