There’s an odd thing about audio books. I find that I can enjoy listening to books that I most likely would not read. That’s been true of some pretty heavy nonfiction. And now I’ve found it to be true of one of Janet Evanovich’s Stephanie Plum books. I started to say “mysteries” or “thrillers” instead of “books,” but I’m not sure exactly what genre aptly describes these books.

I’m a big fan of mysteries, but I usually like the kind that’s more the thoughtful, atmospheric type rather than those with fast and furious action and tough guys and gals. Some of the ones I like can be called “cozy”; others have their share of on-stage violence and suspense, but are nonetheless more psychological than rough and tumble.

So, vaguely aware that Evanovich’s Stephanie Plum was a bounty hunter, I had not been tempted to try the series.

But I was offered a review audio book of the latest in the series at just the right moment. Having listened to several “women’s” books that involved groups of women with various problems that generally turn out well, I was ready for a change of pace. 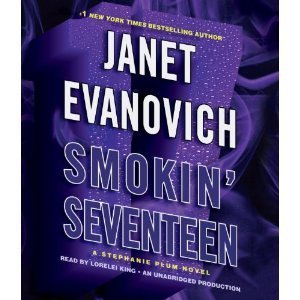 This book is hilarious. That was the biggest surprise of my first experience with a Stephanie Plum novel. What have I been missing? I was laughing out loud while driving around, listening to Stephanie recount her adventures and woes.

Stephanie works as a bounty hunter for her Cousin Vinnie, who runs a bail bond business in Trenton, N.J. When somebody fails to show up in court or otherwise skips out on bail, Stephanie and her partner, Lula (a former “ho”), track that person down, zap him or her with a stun gun if necessary, slap on handcuffs, and haul the miscreant back to jail. At least, that’s what’s supposed to happen. Often, it’s not that simple.

What if the guy who’s jumped bail is convinced he’s a vampire and won’t come out during daytime? What if he tries to bite Lula’s neck? What if the woman who couldn’t be bothered to keep her court date vows to get revenge on Stephanie by running her over with her car – something she’s proved she is all too willing and able to do? What if instead of using money, the accused secures his bond with his valuable dancing bear?

I’ve missed all the Stephanie Plum novels that preceded this one, but that didn’t matter. It doesn’t take much to understand that Stephanie’s a working-class girl whose college education hasn’t done much to help her make a living. She likes the relative freedom of her job, likes that she can dress in jeans and a T-shirt when she goes to work.  Meanwhile, her mom, who lives nearby, wants nothing more than to fix her daughter up with a nice husband. Grandma thinks that’s a good plan, too, and Stephanie’s dad mostly tries to stay out of the way.

The matchmaking is complicated because Stephanie has two men in her life: Joe Morelli, a cop who’s her longtime boyfriend and would probably make a decent husband, if he weren’t afraid of commitment; and the rich, handsome, dangerous Ranger, who’d make a terrible husband, but so what?

Mom, figuring that neither Morelli nor Ranger is going to make Stephanie a bride, introduces a third prospect into the mix. Dave, who was a football star when he was in high school with Stephanie and Morelli, is back in town after his marriage broke up and his banking business ran into problems. He’s from a nice family, and he’s a great cook.

As if life weren’t complicated enough, bodies start turning up at the lot where Cousin Vinnie’s bail bond business stood before it burned and the staff had to move into a bus owned by a guy who’s stoned more often than not.

It’s impossible to describe how funny all this as Stephanie narrates what’s going on in her life. You just have to listen to it. There are adventures, danger and mysteries, too, but the fun predominates.

Listening is all the better because Lorelei King, an actress, is the best audio book reader I’ve ever heard. Whether it’s Lula or the elderly vampire, King gets the voice just right, men as well as women. Her expressive reading adds to the hilarity.

Most, but not all, of the Stephanie Plum books have a number in the title. If I counted right on Evanovich’s website, 20 books came before Smokin’ Seventeen. I know what I’m looking for the next time I need a listening change of pace – and a good laugh.