Looking for a good detective story? Bob Moyer has a suggestion. 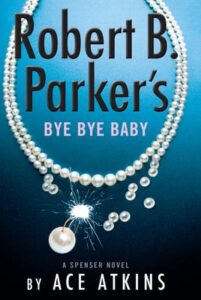 Fifty books. Robert B. Parker’s one-name Boston private detective, Spenser, has quipped, cracked wise, and quoted Shakespeare through that many books, while dispensing his brand of justice with a gun and/or his fists. Of course, Parker did not write all of those books. When he died, his estate farmed out the franchise to Ace Atkins, not a minor talent in his own right. He has ably engineered Spenser through subsequent adventures, keeping him contemporary while maintaining all the quirks that made the franchise so successful, and all his fans so — well, fanatic.

In his latest adventure, Spenser takes on the protection of an Ocasio-Cortez type congresswoman from Boston. She’s the recipient of numerous death threats, and it’s Spenser’s task to not only protect her but also parse out who the source is. He has a plethora of suspects — the corrupt congressman she unseated, a gang of thugs Spenser knows, and a white supremacy group run by a charismatic figure who lives with his mother. Many car chases, righteous beatings, violent deaths and near misses later, Spenser figures it out.

He does it with details that Atkins seems to channel directly from Parker. The book is replete with Spenser’s famous wisecracks for both crooks and cops, Shakespeare quotes dropped at the most unexpected times, and, of course, banter with his “bro”-in-crime, Hawk. A puppy continues the string of Pearl the dogs, and Spenser gets to trade innuendoes with Susan, his main squeeze still after all these adventures. Atkins even brings back Sixkill, the acolyte Native American Spenser mentored into the private eye trade when Parker introduced him. In other words, the Parker estate gets some quality bang for their buck. So does the reader.