On the brink, as seen by one who’s been there

Wondering why there’s a war in Ukraine? This book might shed some light – on that, and on what else might be over “the edge.” 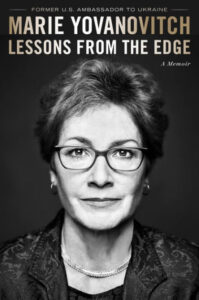 Bear with me if you’ve seen this movie.

A dedicated civil servant is fighting for truth, justice and the American way when the narrative flips. The bad guys frame our hero, fabricating evidence that he or she is the criminal or traitor.  Jimmy Stewart would be the perfect lead.

Unfortunately, this is not a trite piece of fiction. It’s the true-life story of Marie Jovanovitch, a self-described live-by-the-rules introverted career foreign service officer who got in the way of Donald Trump, Rudy Giuliani and a corrupt crowd of Ukrainians.

Jovanovich emerged into public view in mid-2019 from the obscurity of her U.S. foreign service career. She’d spent most of her professional life working in American embassies in Russia and the capitals of former Soviet republics. Her focus was fighting corruption by holding the governments of Ukraine, Kyrgystan and Armenia to the reform promises they’d made to secure American and Western aid.

In short, Jovanovich was a pain in the ass to kleptocrats who sought to siphon off sizeable portions of the aid packages and their country’s wealth for their own benefit. From the summer of 2016 until late spring of 2019, as U.S. ambassador, she was doing that very thing in Ukraine, sometimes with the help of elected reformers there and sometimes with the resistance of holdovers. But she faced constant resistance from former officials of a pro-Russia government who were plotting both to get back into power and to tilt Ukraine’s allegiances to Moscow.

Giuliani had an idea. Create a narrative that former Vice President Joe Biden was involved in the Ukrainian corruption and get the Ukrainian government to open an investigation. Trump loved the idea, but Jovanovich was a problem. She stood in the way. Her reform efforts were aimed at the very people the two Americans needed to create this lie. Thus, they fabricated stories alleging she was also corrupt and got them into American far-right media such as The Hill newspaper and Fox News.

To those who followed the congressional hearings leading to Trump’s first impeachment, Jovanovich should be recognizable. She testified twice, once in private, later in public. In time, she was cleared.

The impeachment testimony and the Ukraine ordeal are only the ending for Jovanovich, and the story she tells of her earlier life and career are fascinating. She was born in Montreal in 1958, the daughter of two stateless Russian emigres. They had fled the Soviet Union after their parents had sided with the white forces in the Civil War of the early 1920s.

The parents met in Montreal, married, had children and then moved to Kent, Conn., where Marie’s father taught at a prestigious prep school. She attended Princeton, worked in the advertising world and eventually entered the foreign service.

The first half of her memoir focuses on her personal development and the institutional sexism she faced both at Princeton and in the foreign service. It is also an entertaining primer on life working for the State Department.

The second half of the book focuses on her assignments, and at times I felt as if I were reading a historical novel, one of those books where the author contrives a character who serendipitously arrives in a place just as a major event occurs. For example, see Pug Henry in Herman Wouk’s The Winds of War.

Jovanovich’s presence in these former Soviet republics provides a succinct review of Vladimir Putin’s prolonged efforts to subvert reform and pro-Western movements in these republics, to spread disinformation and to reel these countries back into Russia’s sphere of influence.

For those of us who were not paying attention, I’ll only say that we missed a lot, and much of what we missed is germane to the current war in Ukraine.

She concludes with a warning, that the U.S. teetered on the brink of becoming the kind of corrupt state she worked hard to help reform, and that that danger remains.

This is an entertaining and enlightening story, well written and, in the audio version, well read by the author.