Bob Moyer is back with a review of a book with plenty of “outlandish humor.” 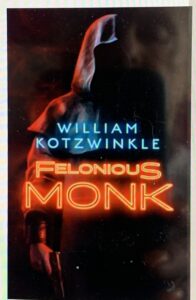 William Kotzwinkle may be the most famous author you’ve never heard of. He has sold more than 10 million books across a swath of genres: the cult ‘70s favorite The Fan Man, the heart-rending Swimmer in The Secret Sea, the dystopian Dr. Rat, the novelization of E.T., the graphic novel Herr Nightingale and The Satin Woman, and that favorite of children of all ages, Walter the Farting Dog picture-books series. To this and other titles, he has added a new genre—comic noir.

The title, Felonious Monk, hints of the wry, often outlandish humor that suffuses his work. His narratives match Donald Westlake’s for outrageous, and Robert B. Parker’s for wit. In his first book in some years, the author gives us Tommy Martini, the scion of a “made” Mafia family. Tommy was deposited in a Mexican monastery to keep him from facing a murder charge. He has spent years as a monk, trying to control his temper with medication and meditation.

His tranquility is tried when his crooked priest of an uncle dies and leaves him his house, his money—and a few possibly lethal problems. When Tommy shows up in Paloma, Arizona, a town rife with “cartoon spirituality,” he encounters a set of characters that want to take grievances against his uncle out on him. He loses his medicine and all control when he is attacked. Fortunately, he’s a big guy with a big punch and a cousin who has a cement-truck connection.

Tommy, however, has more than a temper problem; he has a temptation problem. He takes up with a spiritual con artist who turns out to be as murderous as she is beauteous. He spends the second half of the book just trying to stay alive.

He’s successful, of course, and returns to the sanctity of the monastery, flush with cash, back in training and ready for another adventure that he probably can’t refuse. Let’s hope Kotzwinkle can’t refuse a sequel.