Scarpetta’s back, in fine form 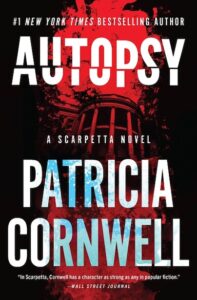 I have to admit that my first thought upon hearing that Patricia Cornwell has a new novel out called Autopsywas: “Hasn’t she named one that already?” After all, Cornwell has written lots of popular books starring Dr. Kay Scarpetta, a forensic pathologist who conducts autopsies as she goes about solving murders.

The answer is no, the previous 24 novels in the series have had more creative names, although the debut – Postmortem, in 1989 – came close. I’m guessing she named No. 25 Autopsy to let longtime fans know that she’d resurrected Scarpetta after a 5-year hiatus.

During that time, Cornwell produced two books in the new Captain Chase thriller series, set in outer space and featuring lots of cutting-edge science and technology. She uses some of her experience with those books in this one.

In Autopsy, Scarpetta is back in a way that will likely please those longtime fans. She’s even back in Virginia, once again the state’s chief medical examiner, as she was in those early novels. Familiar characters are back, too. Her husband, Benton Wesley, is now a forensic psychologist with the Secret Service, and they find a place to live in Old Town Alexandria in northern Virginia, near D.C. Lucy, her brilliant but troubled niece, lives in the guesthouse behind their home.

The setting is after the pandemic, which brought changes to the familiar cast of characters. Lucy’s significant other and their adopted son were victim of the virus, and Lucy is not faring well as she battles grief and guilt. And during the pandemic, Scarpetta’s difficult sister Dorothy  – Lucy’s mother – married Scarpetta’s longtime friend and colleague, Pete Marino. They live near Scarpetta and Wesley in an upscale townhome community,

After all that’s happened, Scarpetta is just happy to have them all nearby and safe – until she begins to worry that they aren’t safe after all.

Scarpetta is having a tough time trying to reassert control over the chief medical examiner’s office, which has suffered from neglect, incompetence and, quite likely, outright corruption in recent years. She has at least two strikes against her – an overbearing secretary appears to be working against her, and her predecessor in the job is now the new state health commissioner and therefore her boss, even though she’d been told he was taking a job in the private sector. Realizing she’ll need help, she brings in Marino, the former cop, as a private contractor.

She’s barely had time to get her bearings in her new job when a woman is found brutally murdered, her throat slashed and hands cut off, beside a railroad track near where they live. When the victim’s identity is eventually determined, it’s even more troubling, Then Scarpetta learns that several months earlier a young woman jogger had been found drowned in the same area – and that her predecessor, now boss, had made sure that investigation went nowhere,

Is there a serial killer at work? Is there some kind of coverup?

Meanwhile, Scarpetta gets called to the White House to help with a first-of-its-kind investigation of suspicious deaths of two astronauts in a top-secret laboratory in space. That’s unrelated to the other cases – or is it?

All that Scarpetta fans enjoyed over the years is here again: surprising plots twists, the latest in science and technology, familiar and interesting characters, Scarpetta’s determination to see that justice is served.

After a complex and sometimes slow-moving buildup, the solutions to the various mysteries and dangers Scarpetta faces are a bit of a letdown. The end of the book comes quickly, leaving  readers feeling a bit let down.

If you like Scarpetta, though, you’ll find this book well worth reading.