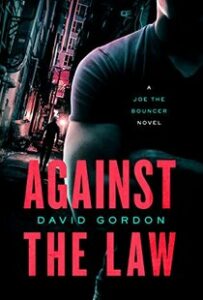 When it’s August and too hot to do much outside, Bob Moyer puts his time to good use reading and reviewing books for Briar Patch Books. Let’s all be like Bob.

This is a rip-roaring novel. That’s a phrase usually reserved for lively, raucous events like movies or rodeos. Well, David Gordon writes lively, raucous scenes. He turns loose a motorbike in Kabul that can be heard climbing warehouse stairs and sailing across roofs, while a helicopter zeroes in on it. He sets cars, trucks and horseshit flying down a New Jersey highway, the screech of car tires doing a 360 resounding through the narrative. The author has a visceral style that has his characters swirling around in intricate chases. The only thing with more twist and turns is his plot.

That twisty thing centers around White Angel, a high potency heroin imported into New York neighborhoods, along with an organized attack on the existing lords of the streets. At first, the miasma of characters makes a scorecard sound like a good idea, until things settle in. An international corporation in cahoots with the CIA, the Russian government, a Russian hit girl and a turncoat New York mobster, backed by military-trained mercenaries led by an apocalyptic leader, mean to take over the drug business. Arrayed against them are a female FBI agent, the CIA, two New York cops, a Jewish mob leader, a Black mob leader, and Gio, the Italian mafioso who launders money through a chain of ice cream vending trucks. He’s the one who ropes his best friend from childhood into cleaning things up—the only “honest thief” in the group, Joe the Bouncer.

Joe is an Iraq vet with a lot of unsealed mental wounds who works as a bouncer in Gio’s club. He’s trying to lead a simple life, living in Queens with his grandmother, a former grifter. She fixes him meals: they watch JEOPARDY! every night he’s home. Which isn’t often, because over the first two books of this series, he’s earned the name of The Sheriff, since he cleans things up and establishes order when he’s hired. With the help of his homies, including Yelena, a former Russian agent trained by the Russians sent to take out… well, the plot keeps turning, complete with a lot of blood and banter, until the finale. That flying meat circus takes place in a Russian bath, a lengthy scene that plays out like the Marx Brothers directed by Quentin Tarantino.

Since it’s a series, most of the people with the good guys make it through. Joe still has a job with Gio, and before long, The Sheriff’s adventures will rip roar through the streets of New York again.

This entry was posted in Mysteries, Thriller/Suspense and tagged David Gordon, Joe the Bouncer, thrillers. Bookmark the permalink.