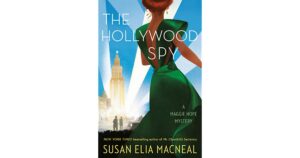 If you believe the inspiring old stories about how patriotism united America during World War II, Susan Elia MacNeal’s latest Maggie Hope suspense novel will be an eye-opener.

When we last spent time with Maggie, a daring young woman who’s been a code breaker, an assistant to Winston Churchill and a British spy, among other adventures and misadventures, she was struggling with the effects of several years of war, danger, espionage and more terrible experiences than most people endure in a lifetime.

As The King’s Justice (2020) came to an end, after Maggie was reluctantly drawn into solving more horrific crimes in London, she decided, with considerable misgivings, to go to Hollywood to look into the suspicious death of a woman found floating in the pool of a posh hotel. The woman was the fiancé of John Sterling, the RAF pilot who had once been Maggie’s own fiancé, and John wants to know the truth of what happened to her.

Maggie realizes the awkwardness of reuniting with the man who broke her heart, not to mention trying to solve what he believes is the murder of the woman who took her place. But John needs help, and Maggie, with all her experience, is well prepared to give it. Then too, she desperately needs a change of pace and scenery, and even though the U.S. joined the war after Pearl Harbor, the fighting is far away from American shores … or so she’s been led to believe.

She’s British by birth, works for MI5 and owns a house she inherited in London, but heading to the United States is a homecoming for Maggie.  She was raised by her aunt, a professor at Wellesley, after her parents were killed in a car crash in England (or so she believed; as this series has unfolded, Maggie has learned a great deal about her British father and her German mother).

Her time in Hollywood in 1943, however, is not as much a break from the stresses of wartime Britain and Europe as she had imagined. People are not as united behind the war effort as the newsreels and patriotic films suggest.

Maggie’s investigations give readers an entertaining tour of the people, places and lifestyle of Hollywood’s Golden Age. They also reveal the darker realities – and dangers – behind all the glamor and glitz.

And they help Maggie learn some more truths about her own life and relationships as she looks forward to her next adventures.

This is another fine, entertaining and historically enlightening entry into an outstanding mystery series.