Here’s Bob Moyer again, this time in D.C., taking a look at the second book in a new series. 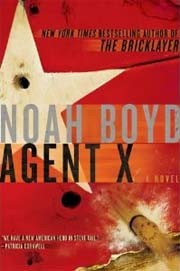 Take a deep breath before you begin this book.  The Bricklayer, a cross between James Bond and Sherlock Holmes (with a touch of Groucho Marx), works at a breakneck speed. Before the book is 16 chapters old, he has retrieved two kidnapped children, caught the kidnapper, and tracked down a serial rapist/murderer – and those are just subplots.

Steve Vail went back to his family trade of bricklaying after he got the bum rush out of the FBI for his unorthodox tactics. When things went south on a project, however, they called him back to use the very tactics that had tainted his reputation.

Now he’s back in D.C. to follow up with his supervisor on the case, a maybe girlfriend. He’s on his way out of town after a failed attempt when the bureau’s director begs him to take on a case decoding a double agent’s cryptic clues, and to save his would-be girlfriend’s reputation. He agrees, and heads down a trail laced with bogus clues, bad guys with big accents, bullets and bombs.

He untangles each puzzle with intuitive ease, the answer coming to him while having coffee or a non-related conversation. Just as the case seems to be closing, however, all the clues come back around to implicate his object of affection. This time, it’s not just her reputation that’s endangered; it’s her freedom.  The Bricklayer does a quick turnaround, saves her, and snares the AGENT X who has been setting them up all along.

Although the villain isn’t buried as deeply in the book as he is in the Bureau, the pace and the puzzles entertain and engage the reader here. The Bricklayer also puts down some of the best banter west of Robert B. Parker’s Spenser, and he has a disarming set of personal issues.

All in all, the author has laid the foundation for a decent series with his second Bricklayer book.