The City of Devils 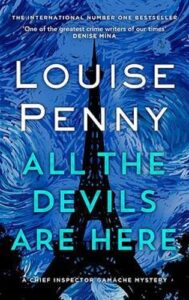 Among the many things I missed during the year of COVID was a long-awaited new novel from Louise Penny, one of my favorite authors. Sometime in 2020, All the Devils Are Here, the latest mystery starring Armand Gamache, was published, and I apparently didn’t even know it.

But the grievous oversight has now been corrected, and I am delighted to report that in All the Devils Are Here, Louise Penny and Gamache are at their best.

Armand and his wife, Reine-Marie, travel to Paris for what should be a joyous family occasion: Their daughter Annie and her husband, Jean-Guy Beauvoir, are about to deliver their second child, a daughter.

The trip also allows a reunion with their son, Daniel, and his wife and two daughters.

Like Jean-Guy and Annie, Daniel now has a career in Paris.

But on their first night in Paris, things go badly awry. The extended family gathers for a bistro dinner with Stephen Horowitz, Armand’s godfather, an influential billionaire who raised him after his own parents died. As they contentedly stroll through the streets of Paris after their dinner, bound for their various lodgings, they are shocked and horrified as Stephen is run down and critically injured.

Armand, drawing on many years of detective work and finely honed intuition, knows what he saw was a deliberate attempt to murder his beloved godfather.

And with that, Armand, and soon the rest of the family members, are caught up in a frightening, confusing, perilous web of – what?

Paris has never seemed less like the City of Light. Dark shadows are everywhere – within the police, in the offices where Jean-Guy and Daniel work, in Stephen’s life… . Armand, Jean-Guy and the others don’t know whom to trust or how far the evil, whatever it really is, might extend.

Jean-Guy, formerly Armand’s second in command at the Surete du Quebec, slips back into detective mode.

Even Daniel, whose long estrangement from his father has been a source of sadness and some bewilderment for Gamache, is drawn into the effort.

The quest takes them to some of the most iconic sites in Paris, and into dark recesses where devils lurk.

A great deal is not as it seems, and Gamache must deal with doubts about old friends and even family, as the stakes grow higher and the danger increases.

By the time all becomes clear, and it eventually does, everyone, including the reader, is glad when the Gamache family heads back to the – usually – peaceful if eccentric village of Three Pines in Quebec.

One response to “The City of Devils”