A treat for Spenser fans

Bob Moyer reviews the latest in a venerable detective series that has outlived its creator. 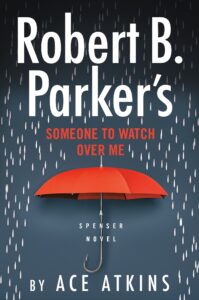 Since Ace Atkins took over the Spenser franchise, he has aptly inhabited not just The Spenser voice, but the habits, peccadillos, and even geography of Boston’s most-loved private eye. He continues apace in the latest installment:  24 beers, nine literary quotes, two “eeks,” a clutch at his fake pearls, and doughnuts galore. Of course, there’s also the sexy innuendo between Spenser and his main squeeze, Susan, the BFF banter between Spenser and Hawk, and the barrage of insults laid upon Spenser by various law enforcement officers. It’s all that Spenser fans can ask for, and more.

Readers also expect a decent plot, and the one Atkins provides is adequate, albeit predictable. It can be summed up in two words — Jeffrey Epstein. If you have followed the arc of this serial pedophile, the details will be familiar.

Never afraid to introduce new characters, Atkins gives Spenser a new sidekick. A slip of a girl when Spenser helped her out of a jam, Marty is now a young woman determined to be a detective. Incensed, she comes to Spenser with the case of a friend’s 15-year-old sister. Groomed by a billionaire’s assistant, the girl was then assaulted by the rich guy, and threatened when she tries to get her laptop and backpack returned. Within a short time, Marty and Spenser uncover wide-ranging exploitation of underage working-class girls, all centered in the billionaire’s mansion on Commonwealth Avenue. The two gumshoes start collecting victims willing to testify, law enforcement willing to prosecute, and, fortunately for the sake of entertainment,  thugs. The rich guy sends an assortment of ruffians to dissuade the victims and Spenser from pursuing the investigation. Needless to say, the average ruffian is no match for Spenser, and numerous very satisfying brawls ensue.

The case and dozens of illicit encounters lead from Commonwealth Avenue all the way to the Bahamas, where the creep owns an island. It is inevitable that Spenser and Hawk will end up there. The drama lies in how they get in, and whether they will get out. The satisfying ending is, in the book cover blurb’s terms, a “final epic showdown.” Although he spends a bit of time pondering his mortality, Spenser does manage to rally one more time. The only demise likely for him is whether Atkins will continue the series, or will Spenser have “eeked” at his last tough guy.