What he left behind

Bob Moyer takes on a different kind of mystery – not a whodunit, but a look at the strange realm of human love and relationships. 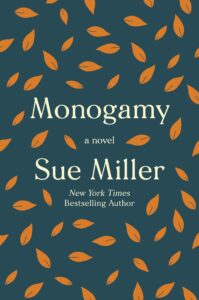 In this fine novel, filled with authentic detail of time, place and demographics, the main characters are or have been married — the larger-than-life bookstore owner Graham, his second wife Annie, his first wife Frieda, and their son Lucas. Only Sarah, the daughter of the second marriage, is not married. Late in the book, she muses about what she wants:

Not marriage — not all the other promises to be made, and then broken. Not the   children, the difficult growing up. The wounds inflicted, back and forth, the inevitable disappointments, the unbridgeable distances.

By this time in the book, author Sue Miller has manifested in excruciatingly fine detail a litany of the pitfalls (many) and pleasures (few) of Monogamy. It all  begins when Graham unexpectedly dies in his sleep. He leaves Annie with grief, his son with a sense of distance, his ex-wife with resentment and his daughter with her insecurity. He also leaves behind an act of adultery.

Miller takes a page from Anton Chekov’s playbook here. Chekov said that if you hang a gun on the wall in the first act of a play, you have to use it in the second part. Miller loads Graham’s infidelity up in the first few pages and then fires it off in the second part. With finesse that would make Chekov nod in appreciation, she stages a scene in which Annie comes across the mistress weeping at Graham’s desk, and immediately shifts from grief to anger. Miller takes the rest of the book, up to the very last sentence, to resolve that anger.

With an astute eye for detail, she shows how a disturbance like Graham’s resonates through the lives of the other characters. The reader experiences Annie’s anger while she’s in the dentist’s chair, Lucas’ distance from his mother at the dining room table, Sarah’s consternation when she finds a book defaced by her mother. It’s not often that a book about domesticity could be called a page-turner, but Monogamy comes close. There is no mystery here, but there is more drama than one would expect, thanks to Miller’s skill. And many a reader will recognize many of the pitfalls of Monogamy.