In the swamps, Burke takes it up a notch

Bob Moyer has been busy, moving to a new home and doing all the other things Bob Moyer does. Including reading. Now, at last, he’s found time again to write some book reviews and share his literary finds with us. Thank goodness. 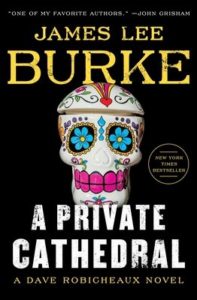 The supernatural has always loomed large in the swamps of James Lee Burke’s Iberia Parish. Deputy Sheriff Dave Robicheaux has watched Confederate soldiers gesture at him to join them, he’s seen specters of his Vietnam journey appear before him, he has seen evil appear in a number of forms — life doesn’t pass through the swamps, it sinks in and is released from time to time.

In A PRIVATE CATHEDRAL, author Burke has taken the supernatural up a notch to science fiction. When Dave discovers that a mafia don has given his daughter to a local populist demagogue, he can’t leave it alone. He can’t leave the mafioso’s longtime mistress alone, either. The don doesn’t suffer Dave’s attention lightly. He brings in a green-scaled, hooded-eyed character who appears in a mist on a ship manned by unreleased souls, has hallucinatory powers — and moonlights as a hit man. He is the most formidable foe that Dave and his buddy Cletis, known as “the Bobbsey twins” when they were on the New Orleans police force, have ever faced.

Set in the past, just as Helen Soileau has been appointed sheriff, the book abounds with the violence that was de rigueur both at that time and in earlier books of this venerable series. Also extant is the elegant prose Burke produces, as evil manifests itself in the landscape. Dave has gone through “…the long night of the soul,” and feels as though he is “…the only occupant in a cathedral in which you can hear your heartbeat echoing off the walls.”  Time and again, Dave battles this sense of “…being in a black box for the duration, Jason.” He rants eloquently, and frequently, as he battles his own demons of alcoholism and violence.

In fact, those personal demons are more interesting than the green one Burke has conjured up to further complicate the lives of Dave and Cletis. The strengths of a Robicheaux novel are still here. The pleasure in the book, however, depends upon your threshold for science fiction mixed in with this familiar setting. It’s a literary gumbo not for all tastes.